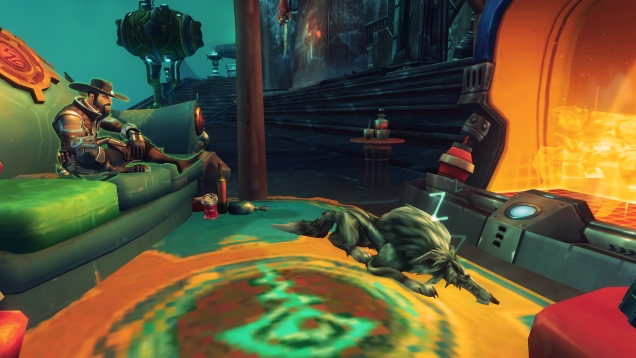 It’s been a while since I’ve talked about WildStar. It’s been a while since I’ve THOUGHT about WildStar. That’s not willful ignorance; WildStar simply doesn’t come up much these days in the news or among MMO bloggers. I think the game got out two or three patches last year and keeps faithfully turning on and off events, but it’s relatively quiet for a relatively newer MMORPG.

If WildStar comes up in conversation, honestly, it’s because everyone is collectively amazed it’s still running. NCsoft is not known for its long patience with underperforming western MMOs, and yet it’s kept the lights on at Carbine far longer than we would have assumed. Free-to-play helped, but it wasn’t that much of a sustained bump to really send it rocketing up in the charts… and it’s been trailing downward ever since. Quarter after quarter, it was bringing less money, which no doubt meant fewer players, until NCsoft finally lumped WildStar in with their “other games” category and stopped reporting on it separately.

So what’s going on behind the scenes? Carbine had a lot of layoffs, and that coupled with the much slower patch cadence, I think it’s safe to assume that WildStar is operating with a skeletal crew at the helm. Maybe small enough operating costs that it keeps Carbine in the black, somewhat justifies the game’s existence. But why NCsoft doesn’t just kill it? I have a few theories, but nothing strong. Maybe the studio is waiting for a specific time, maybe there’s a license or agreement or timed something involved. Maybe NCsoft doesn’t want the PR black eye of shutting down a game right now. Maybe WildStar is actually doing better than what we assume. Maybe there are secret plans to bring the game to a new region or NCsoft is looking to sell it. All of that seems flimsy to me.

But the net result is there’s a real lack of gamer confidence in WildStar. If I’ve seen this conversation on Reddit once, I’ve seen it a hundred times — someone asking about the game, if it’s good, if it’s still worth playing, and others responding that it’s surprisingly solid and entertaining but has a diminished population and an irreperably tarnished reputation among the MMORPG community. F2P or no, it doesn’t seem like people are flocking back, and WildStar doesn’t have the luxury of a large pool of nostalgic veterans primed for a return one day.

It pains me to think of this. It pains me to write it. There are so many wonderful things about WildStar that it’s a shame that it ended up so disgraced and ignored. It’s brimming with personality, with an original setting, with great music, with some of the best player housing that this genre has ever seen, with some terrific alien races. But the failure in overall design and mismanagement from the studio during its development and first two years of operation pummeled any hope this game had.

I’d love to say that I was tempted to go back, but I’m not. I’m just too worried about WildStar’s continued existence to divest my time and effort into playing a character. If I think its likely that a game could get its plug pulled any day now, then it really hampers my interest.

I don’t know what could happen to bring WildStar back from the brink. If it has the luxury of time — and who really knows right now — then solid patches, positive word-of-mouth recommendations, and maybe a splashy event or expansion in the future might be the long-term path to survival and to flourish. But if Steam and F2P couldn’t really change the course, I don’t know what will. Only the fact that NCsoft hasn’t canned it yet makes me think that there’s a glimmer of a chance that there’s something in the works for its future.

I wish it hadn’t gone down this way. I had a great time in WildStar and if it ever went under, it will be a blow. I also wish it had been better managed from the start and that it erred to be more casual than hardcore, but here we are. And there it is.

9 thoughts on “Does WildStar have a chance?”