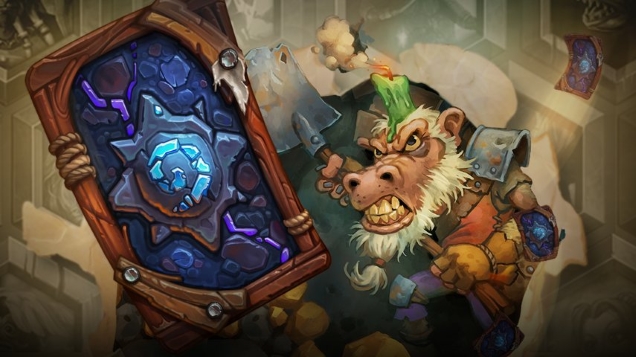 I think it’s been at least two years — maybe? — since I last touched or even thought much about Hearthstone outside of the news that I’ve been given on occasion to write. I was pretty much just there for the launch month or so and then drifted away.

But we all know the story of when we drift back to games, and that’s what happened with this title and me. I guess I’ve been thinking about games to be playing while I’m doing my exercise bike this winter, and my recent adventures in World of Warcraft led me back here. Plus, Hearthstone kind of had the best presentation at BlizzCon during the opening ceremony, which I respected. The dungeon runs also sounded cool.

Was it too late to get into, I wondered? I wasn’t going to drop any money on this, not during Christmas month, and I know that a ton of expansions and sets had dropped since I last played. But hey, nothing ventured, nothing gained.

When I logged in and loaded it up, I was surprised to see Hearthstone outright acknowledge that I hadn’t played in a long time and would I like some help getting back into the swing of things? Yes please, I thought, that would be most appreciated.

So the game encouraged me to go through a few sets of matches, first PvE and then PvP, rewarding me with free packs of cards left and right for doing so. I think that by the time I finished the welcome back chain, I had netted nine free packs, which most certainly put some wind in my sails (and cards in my deck).

That didn’t mean I was fully back on my feet. For one thing, I hadn’t even managed to unlock all of the basic cards when I was playing last. For another, I had all of these outdated decks that I had made that were either invalid (because they had been bumped to wild) or were completely unfamiliar to me. When that happens, I wipe the slate clean and start over as best I can. So I deleted all of my decks and started building up new ones, focusing on the quests every day to see if I could earn some gold.

It’s not been terrible nor unenjoyable so far. I’ve been playing ultra-casually, mostly because one match in Hearthstone takes about four times as long as a match in Clash Royale, and I have to be in a patient mood. I also have to divorce myself from caring about whether I win or lose, whether my minions get killed or not. That helps me keep the blood pressure down when I play these kinds of PvP games, and keeping a calm head aids in making logical decisions.

I’ve been winning some, losing some, and promising that I’m going to really sit down to build up a solid deck one of these days instead of some Frankenstein quilt of random cards I whisked together. My wife even took the tablet out of my hands one time and taught herself how to play during what must have been a bewildering match for my opponent. One thing you can always say about Blizzard — that studio knows polish and accessibility.

We’ll see how it goes. As I said, with the matches taking as long as they do, I can’t spend all the live-long day playing Hearthstone, but I can squeeze in a match or two here and there depending.