I just fell off the world… and onto a new one!

In some ways, I’m envying the crowd in World of Warcraft these days that have already pre-ordered the expansion and are spending the hours leveling up the new allied races. This isn’t something I want to do right now, mind you, but it’s just an envy of the leveling and questing process vs. the endgame economic loop that I’m in. There aren’t a lot of story arcs and zone progression for me right now, is what I’m saying.

In addition to refining how I’m trying to make gold in WoW, I’ve been working on sorting out just what my characters should be doing. Let me say that I’m frustrated with how the game’s structured its level 110 content, because it is confusing as all get out to know what to do and in what order. I’m not talking at all about the dungeon-raid grind — that’s something I’m avoiding altogether because I like my life. I’m talking about Argus and finishing up the order hall quests and getting class mounts and trying to push my champions to ilevel 950 and the multiple different quest arcs that are thrown at you. Some aren’t that important, some are. But so many are just not that easy to follow, and the game has lost me at several points.

It’s for this reason that I welcome the reset of a new expansion, even as I’m grumpy about losing the artifacts and legendaries that we spent so much time acquiring and building up. I’m just tired of the headache of trying to sort out the important stuff from the quest noise that builds up in my logs.

So right now if I have time after dailies and whatnot, I’ll try to work on one quest in each of my three character’s logs so that I’m not purely spinning my wheels here. 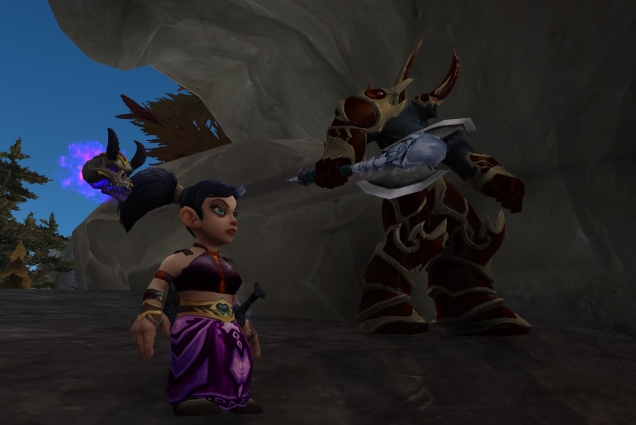 This also meant finally taking my Warlock Syperstar out of semi-retirement, where she’s been spending months in the Garrison making hexweave bags and wishing for a better life. As a rather fresh level 110, she has so much more to do in terms of quests and gearing up. I’m not going all-out on it, but she is at least doing her daily emissary rounds and helping to bring in a bit of extra cash via order hall missions. Three characters seem like a good number for a gold-making enterprise, and I’m making on average 12-18k gold every day (depending on sales, that could be a lot more).

This effort has paid out in spades. In addition to covering my monthly sub, I’ve generated enough gold for tokens that allowed me to pre-purchase Battle for Azeroth for free. Again, it’s more the principle of being able to earn your own way than actual affordability… but hey, that’s $50 I can spend elsewhere!

I’m also trying to be mindful of too much routine and the looming specter of burnout. As I said last week, there are a lot of games that I want to be trying out this spring, as well as the desire to hit up past MMOs like Elder Scrolls Online and FFXIV. I want to be in a place that if I only had 30 minutes or so to log into WoW, I could still do a lot in keeping my sales and gold generation going.

One thought on “Trying to get organized in World of Warcraft”