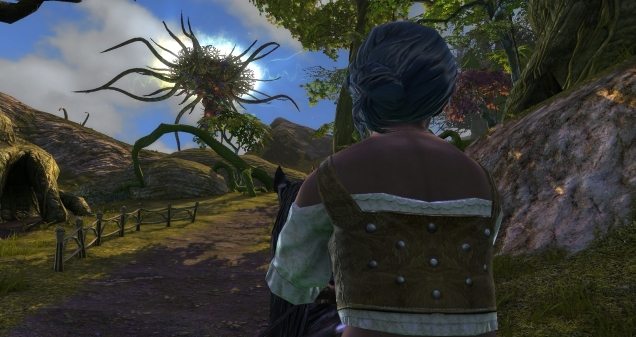 With two character rerolls, a lot of early nights, and plenty of other projects to keep me busy, it’s pretty amazing to me that I managed to finish up Silverwood by the end of Prime’s second week. But here we sit.

At times it was a little slow going, especially when facing those early XP gaps, but I started to make up for it and eventually found my groove. A few more skills and talents on my Bard tree helped as well, and while I’m no killing machine, I’m doing respectable enough that it’s not a slog. 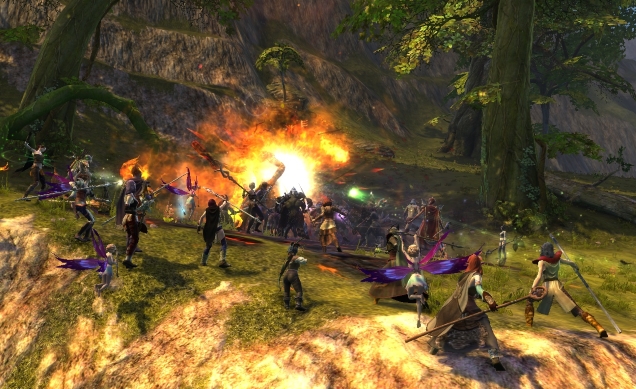 I saw someone mention on Twitter last week that Silverwood was “officially dead” because the Prime crowd had moved on. I would like to submit the above picture as Exhibit A that this is patently untrue, as well as my personal observations from a pokey puppy who is lagging behind the 20s and 30s that are surging ahead. There are PLENTY of players in the 1-20 bracket, and we were never hurting for invasions, rifts, and zone events. Those zone bosses were like magnets, drawing hundreds of players in, and I got a thrill out of each battle I was a part of.

I think the criticism shouldn’t lie there but instead with the abysmal performance of the server. Some days are good, while others have seen the Lag Monster devour all and leave us pressing keys and hoping our characters will take action in the next five seconds or so. For a game of this age, to have lag issues like this is embarrassing.

The last day in Silverwood saw everything picking up steam. I was shooting down quests left and right and racking up achievements like nobody’s business. It was definitely satisfying to cross off so many quests all at once and tidy up the zone as I wrapped up my business.

At the end of Silverwood, I sat at level 19.5 with 210 void stones, 6 plat, a 60% mount, two roles, and a decent start for my planarite wallet. I’m stocking up for planarite gear, so I’ll resist blowing it on lesser essentials. I even have a good handful of blue gear and a pair of shiny new blue daggers from a reputation unlock.

And so I move on to one of my favorite zones in the game, Gloamwood. I love this classic horror-themed region, with its murky fog and funky vampire questlines. Pretty much as soon as I was able to empty out my quest log from Silverwood, I was filling it all back up with quests and carnage tasks here.

All in all, I’m still rocking RIFT Prime pretty hard. It’s been a really fun, enjoyable leveling experience with the added oomph of the increased attention this game has been given and the excitement in the community. I also just have missed leveling characters in World of Warcraft, so this is a good substitute, especially as we head into spring.

My biggest concern right now — my biggest question, really — is how the progression server is going to develop. Trion is still biding its time before giving us any sort of concrete details, most likely watching the speed of the crowds and where everyone is. But still, it’s a bit nerve-wracking to not know if I should be pushing harder and faster in my progression or if I have plenty of time to catch up with those above me before the next batch of content unlocks. Do we have a week? A month? Three months? We just don’t know, and it makes it difficult to smell the roses and enjoy the journey if there’s that fear that I’m going too slow.

So my two wishes are to see the lag addressed and an outline of the progression server unlock going forward. Here’s hoping!

One thought on “RIFT: From sunny to gloomy”