This past week’s Dungeons and Dragons Online adventure was the House K quest “Made to Order.” If you like fighting giant robots and having your butt handed to you on a silver platter, it’s the perfect dungeon for you.

The quest involves an inventor named Haywire who whipped up a bunch of golems in his foundry that have since turned against him. He’s not too concerned, being protected in his panic room and all, but now I’ve got to go rescue him from his folly.

Check it out, we’re fighting Cylons in this quest!

If the above picture didn’t tip you off, this mission is pretty hardcore. I think I have to resign myself to the fact that I’m done with the era of doing hard-mode dungeons solo, because even on normal mode, this quest was just brutal. It’s a long, looping path through a foundry filled with giant golems (clay and iron), packs of hard-hitting Dwarves, electrified rails, and scads of these nasty little landmine traps.

The traps were of particular frustration, because I was not getting the normal heads-up on spotting them until I was standing right on top of them. This could have been because the mission was level 11 and I am still just 10, but still, I hit far too many of these traps. My poor dog suffered the most of it, spending a great portion of the dungeon dead, and if I hadn’t brought a Cleric hireling along, there would have been no chance of making it through.

As it was, plenty of sections had me backwheeling and firing frantically as packs of mobs descended on my head. I also had the joy of getting to the final locked door and finding out that I had only three of the four required crests — I had missed the very first one and had to backtrack all the way down and back to the start. Go Team Me! 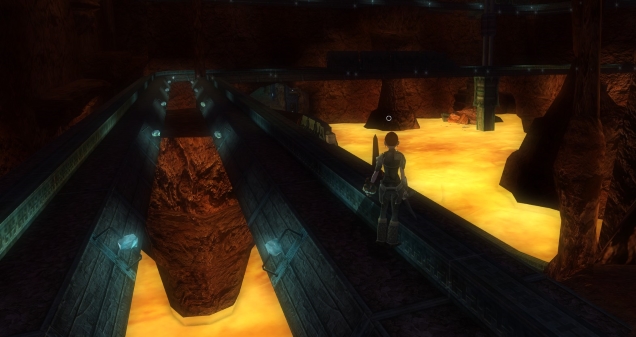 On the plus side, the Foundry was incredibly cool-looking. I kept looping through this middle section with rails and lava, and every time it pleased me with the visuals. The path design is pretty clever, as you start low and gradually loop and ramp up to the top, which kept this dungeon feeling tight and purposeful.

Hey, at least I’m not fighting in those dull sewers any longer.

The final fight… ugh. It hated me.

It pitted me against “ARN-01D,” a giant golem who is a cheeky take on Schwarzenegger’s characters, especially with his final line riffing on the classic “I’ll be back.” But at the time of the fight, I wasn’t laughing, because it completely felt unfair. It was me, this hulking monstrosity, and four additional golems in a rather small room.

I was down to a single application of my machine gun bolts, so very shortly after the start of the fight, I was in survival mode, backpeddling, firing, and just trying to stay out of the range of these golems. The only thing I had on my side was the fact that none of them could attack at range, although ARN-01D could lock me down with a powerful stun and blind if I got too close.

Hooray for me, I won. Take a moment to pat myself on the back for this one.

Guess the guy is turning himself into a construct, but as someone who has at least theoretically done so to my own character through an enhancement, I’m in no position to judge.

6 thoughts on “DDO: Made to Order”