Learn from me and save yourself some future embarrassment by never saying “That’s it, I’m done with this MMO, and I’m never coming back.” Because, guaranteed, you’ll be back wearing some hoodie and sunglasses like you’re in the doofus protection program.

I hadn’t really thought about Guild Wars 2 for a long time — I think the last time I even dipped into this game was June 2017 — but the other week I’m on the MOP podcast and Bree is talking about it, and I blurt out that I think that me and this game are finally through. For good. For realsies.

That’s when God sends a memo to his Department of Ironies and asks for direct intervention in my interest. Because THIS week, Tina came on the show and was talking up the game, and before you know it, I’ve reinstalled the game and made a new character and found a guild and I HAVE NO INTEGRITY.

But I do have purple-pink butterflies, because I’m piloting a Mesmer. I waffled on a few different classes and races for a start-over (it feels too long to take up the mantle of one of my former characters), and the Mesmer eventually won out. It’s a class I haven’t stuck with to the cap, yet I’ve always loved the aesthetic and odd-class-out status. Plus, I’m all about that fencing fantasy, so I decided to give it another try.

Race-wise, I went with human because it ended up being the default. I’m not going to do Plant Elves, for obvious reasons, and Charr are just ten kinds of awkward-looking. I think I’m well past my infatuation with the Asura (nowadays I kind of think they’re creepy), which left me with humans and Plus-Sized humans.

So meet Eoan Echo. I wanted a slightly mystical-sounding name that worked in the word “Echo,” which is an awesome and unfortunately far-too-popular word for naming conventions. “Eoan” means something pertaining to the dawn or east, and I like how those two words flow together to sound effervescent.

As I logged in, I put out a call for guild suggestions (it’s been so long that I’m no longer in any of my old ones). Turns out that there’s a guild full of bloggers and Twitter friends called Kamikaze Runners, so I got plugged into that chatty bunch and started having my fun. Well, having my fun AFTER I transferred all of my stuff and new bags and my infinite harvesters that I spent too much money on back in the day. And all of the birthday gifts that I collected. Might as well hit the ground running! 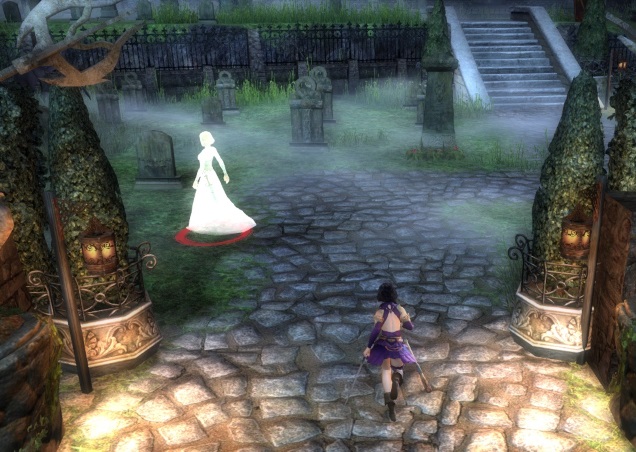 Past that, I just enjoyed Guild Wars 2 the way I did back at launch: through map completion. I forgot how relaxing and enjoyable it is to just jog around the place ticking off vistas and hearts and waypoints. It’s kind of like bubble wrap, with that mindless popping of objectives without any larger narrative or pressure. Sometimes this is exactly what I need from an end-of-day gaming session, and darn it if it isn’t satisfying to see the progress being made.

And even though I do have enough experience scrolls and boosters to insta-level me to 80 many times over at this point, I’m going to level normally. There’s really no rush to get to 80 right this second, especially if I’m doing completion, and I enjoy the little milestones of the leveling process. I don’t have any of the expansions (still), so doing the lazy leveling route might show me if I really want to invest in those at some point or if this is a temporary fling.

At least I have my Bee Dog miniature. And my cool outfits and dyes. And all the butterflies I can stomach.

One thought on “Guild Wars 2 and the bubble wrap satisfaction”