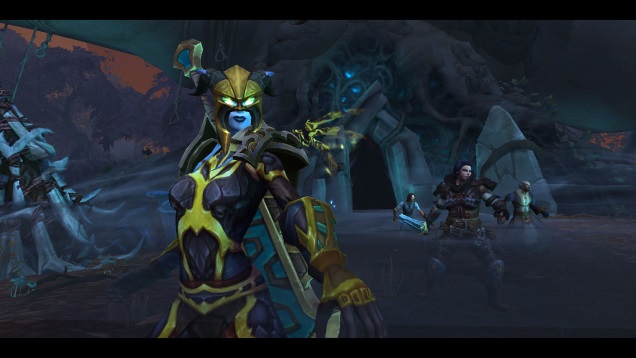 With all of the “new expansion smell” long since gone for Battle for Azeroth, the community has found itself in a strange place. Some, like me, are happily still questing and gearing and busying themselves with a hundred various activities at a casual pace. Others are highly frustrated with what they see as a recycled endgame and lackluster azerite armor. Then there are those who are waiting for Patch 8.1 to arrive and give meaning to their lives again. 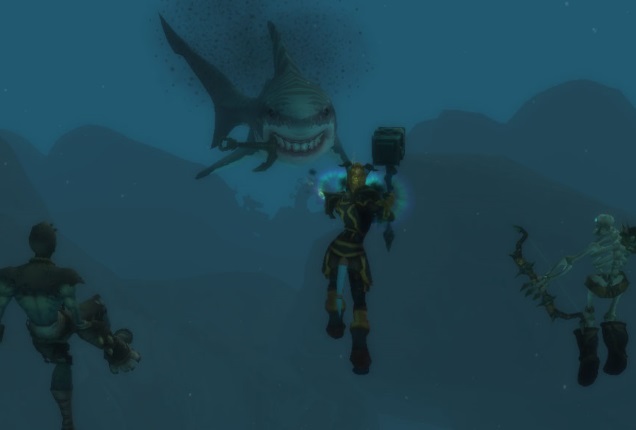 I’d probably be a lot more frustrated if I had blown through all the content and was on my Nth alt, but truth be told, I still only have one level 120 and haven’t even finished all the zone questing yet on that single character. I’ve got plenty to go before I summit Mt. Warcraft again, so for now I’m mostly occupied with a mixture of questing, chasing world quests/emissaries for gear and rep, and very occasionally doing a heroic dungeon. Doing less of those lately because they do take too long and the chances of gear upgrades dropping are kind of rare. 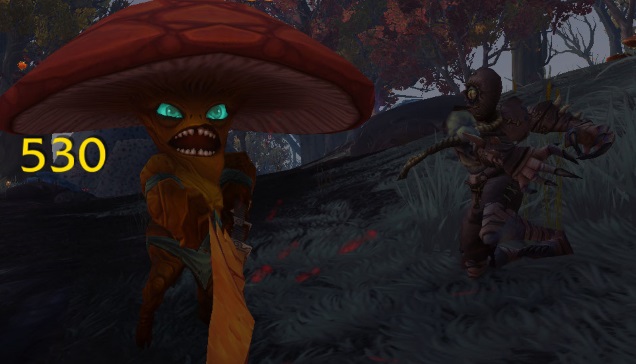 These fungal guys are easily my most favorite foes of the expansion. Blizzard had way, way too much fun with these crazy mushroom dudes. My ghoul isn’t having any of it, however.

I am getting to a much better place, gear-wise. I have mostly blues and a few purples, and I think I’m sitting around 328 or so. The next step is to dip more into mythics and mythic+ dungeons, and there is a rumor that my guild might be setting up a regular night for that. I’d love that; I’m finding that these days, regularly scheduled guild events are the only way for me to get a social fix. I certainly don’t have time to trawl LFG or spam my need across channels.

I did get out to Arathi Highland for some rare questing the other day, and that was both fun and somewhat gear profitable. I was so excited to get a level 340 sword that I swapped it out, disenchanted my old mace, and then realized that it was a ONE-HANDED sword which meant I couldn’t use any of my abilities.

Cue running to the AH to get a 280-ish placeholder and then doing more Arathi until a two-hander dopped. Boy was my face… blue. I’m Draenei, that’s how it usually is, but more blue than usual because of embarrassment.

Nothing like bringing a giant spider train right into the home of an arachnaphobic NPC who is cowering in sheer terror from these beasts.

So I’d say that all in all, I’m in a good place for long-term survival. I do wish that there was more excitement and a personal drive to play, but when I do log in — which is at least for a half-hour every day — I have plenty to do and am enjoying the ride. Still ahead of me are allied races to unlock, other classes to level, and my Horde alt who has probably put my face on a milk carton by now because I’ve been missing so long.

How are you doing in BFA these days? Do you think that 8.1 is going to give the community what it wants and needs?