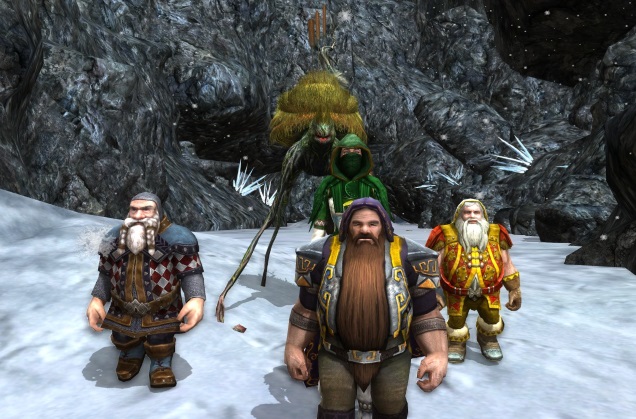 Over the past week I have felt a fun compulsion to log into Lord of the Rings Online more and more. Funny how that happens when I’m not bogged down in the game’s few horrible areas, eh?

Actually, as I’ve been playing, I’ve also been observing my own interaction with the game. I think it was said best that LOTRO is a slow and calming experience, and I agree with that (to a great degree). Unlike the density and proximity of, say, WoW’s quests, LOTRO’s structure is one that I end up spending a lot of time traveling and slowly progressing through an objective. And I don’t mind, because it is relaxing. I can absorb more of the world and listen to music while going back and forth. As long as I’m not in a hurry to progress or push through an area, it’s a perfect pace for me and it’s made for several enjoyable evenings. 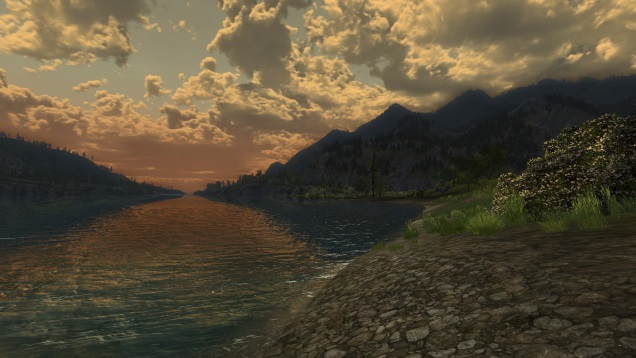 After doing some busy work in Erebor (and catching up on a lengthy series of pre-update quests), I was given a choice to either branch off to the west in the Grey Mountains (Ered Mithrin) or to the east in the Iron Hills. I went west for starters and enjoyed hiking up into the new landscape.

One thing I really love about LOTRO is that while it features a diverse array of landscapes, they all feel as though they flow together and form a cohesive world. It’s all connected in a way that makes me think of distant lands when I’m in a particular area. So while my horse was trotting through the stony valley of Ered Mithrin, I was thinking of the Misty Mountains far away. Both have connections to the Dwarves, but here we’re getting treated to an exploration of two previously background races and their attempts at reclaiming lost cities.

So lots of Dwarf architecture, of which I’m not that keen. It’s mostly angles and giant impossible buildings. I actually liked the interior houses of Erebor more, as they showed how Dwarves actually lived versus the deserted structures of Moria and Ered Mithrin. 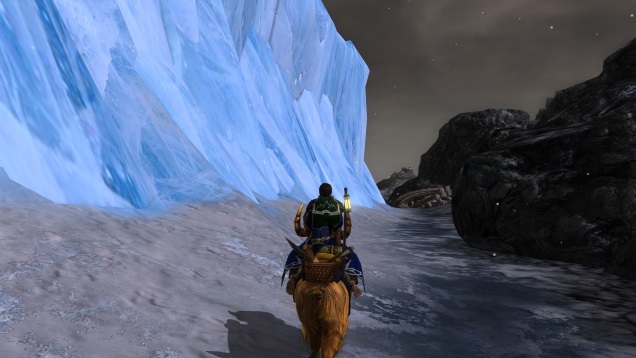 It was a different kind of mountainous area than we’ve seen before, although the difference was more subtle. It felt like the Lone-lands if they were bunched up and made mountainous. The conifer trees lend a great atmosphere of adventure and exploration, although they’re the type where most of the branches are bare save for the top third. So not as lush or Christmasy.

I was also kind of impressed with a glacier (at least, I think it was) that lay at the north side. It turned out to be a surprisingly difficult area full of elite mobs, and the half-dozen or so quests I had there were slow going. It took me most of a night to clear them out, but it’s doable and gave me plenty of opportunities for screenshots.

Fortunately, I had hit level 120 before even getting to Ered Mithrin, so at least I had that extra power boost going for me. Speaking of which, it was only NOW, at level 120, that I found out that Lore-masters can equip pins or somesuch in their ranged slots for more stat boosts! I shouldn’t be blamed too much for this, because I don’t recall ever seeing any of these drop or handed out from quests; the only reason I got one is because I was perusing the Lore-master section on the auction house.

Another adjustment is that I’m actually using food buffs. I’ve only sporadically used them in the past, mostly because the majority of food I could buy off of vendors was of extremely limited duration (5 min). I did load up on regen food back in Moria that lasted 30 minutes, but that’s offered diminishing returns as I’ve leveled up.

However, it’s an advantage that I’d be silly to pass up, and since I have all of this gold that I’m not using, might as well spend it! So I’ve been making a point of buying quality food at the auction house and running all three types of food buffs simultaneously. Kind of wish they persisted through death, but oh well. Don’t think my character’s ever been so well fed!