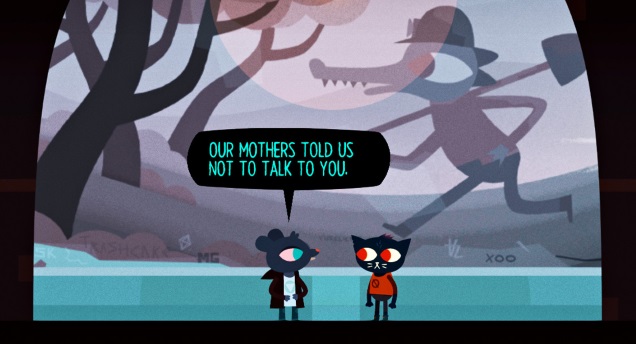 In my quest to feed my voracious hunger for “walking simulators” with strong narratives, I did a pile of research and turned up a small list of games that I had yet to play. As you may surmise, Night in the Woods was one of these, and so I sprang for it earlier this month and made my way through the game over the course of a week.

Well, half of the game at least. But I’ll get to that in a bit.

It should be said that this is a weird game right from the onset, one that keeps you a little unbalanced. One of the ways that it accomplishes this is in the use of anthropomorphic characters along with actual, regular animals. Nobody addresses how there’s a world full of mice-men and dog-men and cat-men and crocodile-men co-existing, so I am guessing that these are supposed to be representing actual people, just gussied up differently for artistic purposes.

The story follows Mae, a 20-year-old cat-girl who is coming back to her Midwestern town after abruptly dropping out of college. The game follows Mae as she tries to get back into her old life while dealing with relationships that have moved on, parents who are upset at her decision, and a real world that demands people work and deal with bills. Mae doesn’t want to deal with the realities, she just wants to keep having fun, acting like a kid, and generally not growing up.

The player controls Mae over the course of several days as she wanders around her small town, gradually getting to know (and re-know) various characters and finding out that everything here has gotten a little bit worse than it was before. Or at least, worse than she remembered. Her old band accepts her back in, but Mae has to figure out where she stands with each of the members. 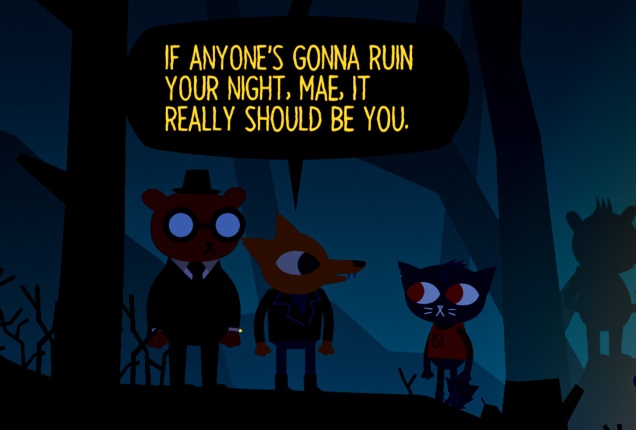 As I hinted earlier, I eventually gave up on Night in the Woods about halfway through. While there were moments of terrific dialogue and clever vignettes, this game doesn’t really go anywhere. It’s a game about a character spinning her wheels, and that gets so, so old after a bit. The only interesting thing that happens for a larger plot early on is that Mae finds a chopped-off arm in the street, but that isn’t brought up again over the next three hours. Then I just closed the game and deleted it.

There are a lot of elements here that, combined, make for a game that I grew to dislike greatly. For starters, I thought that the distinctive art style was honestly rather creepy. The big eyed animals didn’t emote much with their faces, leaving me to stare at those orbs and feel like I was playing a horror title.

Then there’s Mae, who I wanted to smack with a rolled-up newspaper. She’s an inconsiderate jerk who is casually cruel to a lot of people around her and obviously has issues with being responsible and taking charge of her life. I couldn’t connect with her or come to like her apart from sometimes funny stream-of-conscious dialogue.

As I said, there’s the agonizingly slow pace of the game and the lack of an overt plot. But the straw that broke me were these dream segments plugged in between each day to draw out the game. They serve no purpose other than to be occasionally frustrating platforming, and unless something is advancing the plot, I don’t see a need for it.

Anyway, whether or not Night in the Woods got great in its back half is immaterial, because it lost me in the first part. Developers and writers can’t trust that their audience will stick around forever — you gotta make something happen, and the sooner that does, the better.

2 thoughts on “Try-It Tuesday: Night in the Woods”