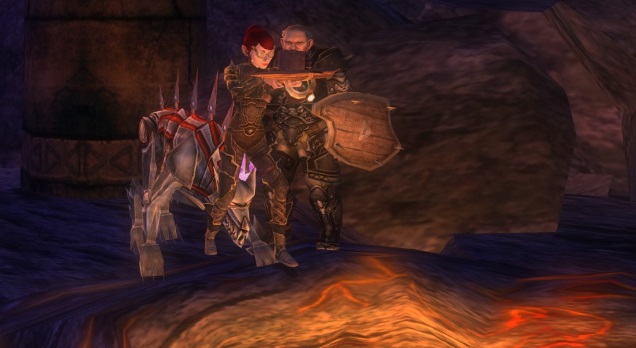 With the long Blood Tide chain complete, I figured that I could mop up the remainder of the House D quests without much difficulty. And then all of the lords of Stormreach laughed, because there were more than I had expected — and the first one, Stormcleave Outpost, was a “very long” mission.

For this one, I enlisted my kids to be morale support while I battled my way through a giant’s stornhold. Mostly this came in the form of “Oh Dad, you’re going to die here! You’re dead for sure!” and then some mild disappointment when I did not, in fact, die.

SSG/Turbine takes a different approach with its giants than most fantasy MMOs. Actually, have you noticed that most fantasy MMOs don’t really do giants? I mean, they’ll do giant bosses, but not giants as a race. The size makes it prohibitive, especially if you’re dealing with architecture. SSG’s approach for both DDO and LOTRO is to make giants de facto cavemen who create settlements out of giant blocks of stone. It’s ugly in LOTRO and it’s ugly in DDO, but I’d rather deal with a giant than a beholder any day.

This mission was quite long, but I left it at normal difficulty and had no problem breezing through it at level 12. Sometimes it’s perfectly acceptable to trade XP and loot gain for the feeling that you’re some super-powered Gnomish nightmare here to bring justice to the evils of the world.

Next up was The Bounty Hunter, which had me assault a cave full of bandits. Nothing too exciting save for a hidden passage and the above room, which had me sprinting and leaping from platform to platform while traps kept activating behind me.

Also, I got a crossbow with this on it:

THIS IS THE GREATEST DAY OF MY LIFE.

Then I got drop-kicked into Stromvauld’s Mine, and my newfound cockiness got a strong reality check. Up front, it wasn’t that difficult of a mission — just long, not difficult. Had to dive down into a steamy mine to locate some engineers, kill a few dozen Drow, the usual. And because feather falling is the most awesome thing in this game, I even had a good time floating my way down mine shafts.

It was all well and good until I got to the end and rescued the head engineer — and the quest didn’t finish. I looked at the unfinished objective: locate the missing engineers. Well, I got the one I saw… and then I realized my mistake. These weren’t necessarily *alive* engineers. Nope! It turns out that all of the corpses I’d been passing, the ones tucked into the scenery, were the main objective. I had to be clicking them all along.

So for the next half-hour, I retraced my steps at least twice combing this entire instance for 10 corpses. And let me tell you, the way that the rust-brown visuals are set up in this mine, it’s incredibly easy for your eyes to skip over non-glowing corpses. I don’t think I’ve ever been so glad to see a corpse as when I found the last one. “Yay!” I said to a sleeping house. “The last corpse is mine!”

This is why I have no social life.

6 thoughts on “DDO: Elves are toast”