(This is part of my journey going playing through 1990’s Secret of Monkey Island. You can follow the entire series on the Retro Gaming page.)

It’s time to finish up the first Monkey Island once and for all! With a navigational-minded voodoo head in his grasp (don’t ask), Guybrush enters the ear of the giant monkey head and descends into hell. Or an approximation of it.

I tensed up during this part, because it was obviously another one of those dreaded maze areas that developers love to put into these games, but honestly it wasn’t too bad. The head keeps turning in the direction Guybrush should go, like a gruesome GPS. I know how that works.

Soon enough, Guybrush infiltrates LeChuck’s pirate ship and starts working on a rescue plan for Elaine. Which apparently involves obtaining a voodoo root that can be made into ghost-dissolving root beer. JUST GO WITH IT.

A three-headed monkey offers Guybrush some much-needed validation during the midst of all of this.

The good news is that Guybrush eventually obtains the magical root beer. The bad news? LeChuck’s ship is gone and he’s off to marry Elaine to advance his nefarious purposes. Honestly, I’m a little fuzzy on this plot point. Really, what does LeChuck need from her? More money and power? He’s already doing pretty well for himself.

Guybrush rushes back to Melee Island(tm) to stop the wedding, but in a neat twist, Elaine’s already affected her own rescue. Which involves dressing up two monkeys in a wedding dress as a fake bride. I kind of want to marry her too, now.

Guybrush and LeChuck finally have it out, and for a good long while, LeChuck has the upper hand as he batters Guybrush all over the island. It’s as if the developers realized that the Monkey Island bit had grown a little boring and dull and decided to cram in as much slapstick and fourth wall-breaking jokes as possible. There are instant replay cams and Stan getting knocked into the bay and LeChuck pumping quarters into a grog machine to get Guybrush to come out. It’s honestly really funny stuff.

Eventually Guybrush wins, thanks to a convenient root beer bottle. 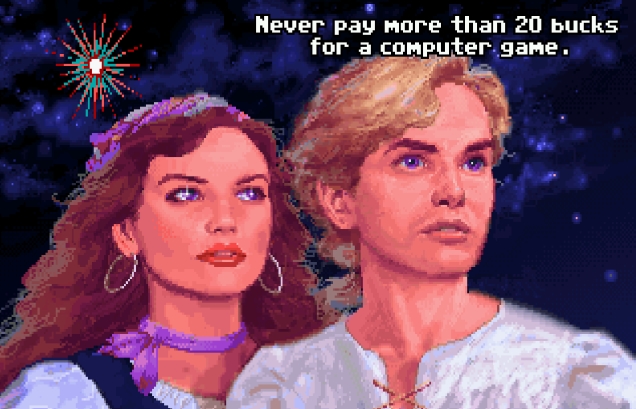 LeChuck explodes in a series of romantic fireworks, and Elaine and Guybrush enjoy a moment of victory — and perhaps connection? — together. 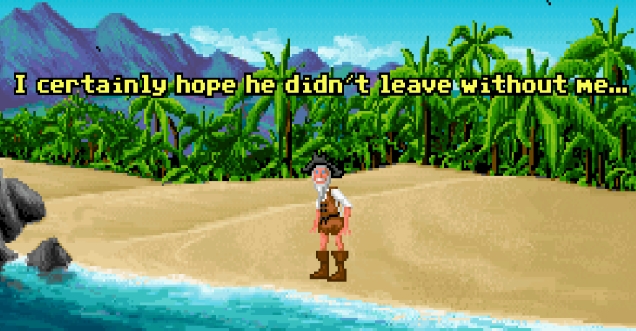 And that’s 1990’s The Secret of Monkey Island! I had really forgotten how clever and hilarious this adventure game is, and it still holds up incredibly well today. I definitely recommend the original graphics over the remake, by the way.

So what makes this game so good? I have to give a huge amount of credit to the writers here. I’ve seen and played parodies that go for the lowest common denominator and the easiest jokes, but Monkey Island is far more witty than that. The jokes are bizarre and in many occasions include the player. The “Not the Red Button!” fight and the reveal of the deadly parrot are two of the best sequences in the game, but those are among many, many such terrific moments. And it’s not too, too difficult to complete, which speaks well for it.

All in all, it got me excited to play the follow-up, which some series fans purport is even better than the first!