(This is part of my journey going playing through 1991’s Monkey Island 2: LeChuck’s Revenge. You can follow the entire series on the Retro Gaming page.)

Could it get any worse than this? Guybrush is stripped of all of his nonsense inventory and thrown in jail by Governor Phatt while the feared zombie pirate LeChuck is on his way to enact revenge. It’s even in the title of the game! What will Guybrush do?

Break out, of course.

This isn’t too difficult, as anyone who has a passing familiarity with Pirates of the Caribbean knows that the dog will give up those keys for a good bone. Man, I miss that ride. Fun times at Disney.

Before he leaves, Guybrush picks up his inventory (in a manilla envelope) and a banana and organ grinder (in a gorilla envelope). I really appreciate any and all dad jokes put into this game. 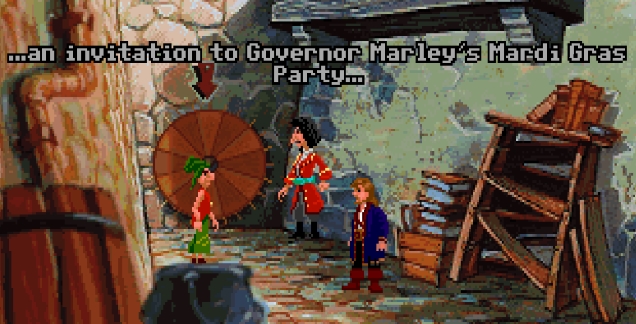 Even though Guybrush is a wanted man, he’s not going to leave the island without the map piece that he needs. To get to it, he’ll need an invitation to Elaine’s Mardi Gras party, and to get that, he’ll need to engage in some fixed gambling. Does this pirate know no bounds? Seems not.

The last thing Guybrush needs to do — for now — on this island is to obtain three important books because… plot. Fortunately, there’s a library, and it’s stocked with so many funny titles that it makes me question the sanity of the game designer who wrote them. At least one completely breaks the fourth wall of the game, but I’m fine with that.

Little touch I loved: Every time you ask the normally harsh librarian to get you a book, she scoots to the back room on her chair with this giant grin on her face like she’s a kid. C’mon, we all did that. 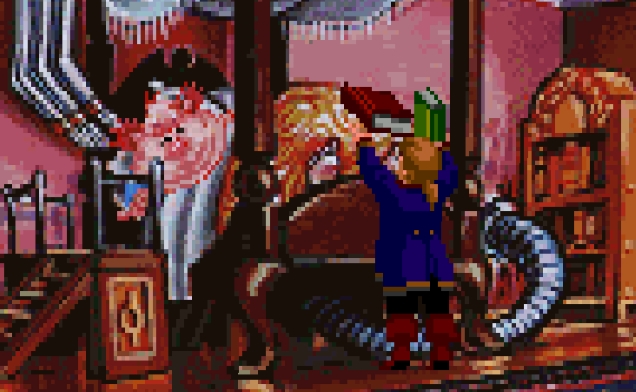 The last book is on Gov. Phatt’s gigantic belly, and Guybrush has to do some Indiana Jones-like measuring (including tearing pages out of a book) to swap them out. That was pretty clever.

Probably my only other (small) complaint about this game is that the sea voyages — done via map — take way too long. I have to spend at least a couple of minutes staring at a line zig-zagging here and there before we get to our next destination… 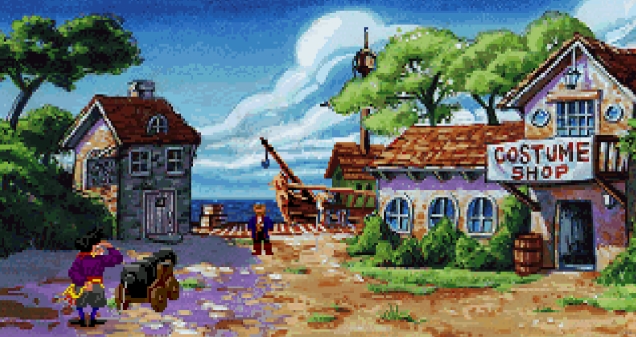 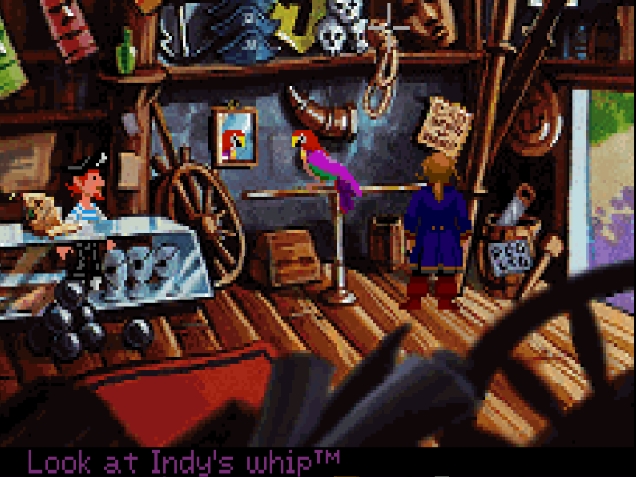 Indiana Jones and the Fate of Atlantis came out around this time, so Monkey Island 2 has a little bit of cross-promotion going on. Two great games come together! And for a third Indy reference, nearby is Kate Capsize, a sly reference to Kate Crapshaw, the actress who played Willie in the second movie.

This souvenir shop contains a lot of weird and interesting items, and it’s entirely possible to get lost for about 10 minutes checking all of them out. Guybrush buys a few important items here, including a mirror that Polly there is preening herself in.

One thought on “LeChuck’s Revenge: Jailbreak!”