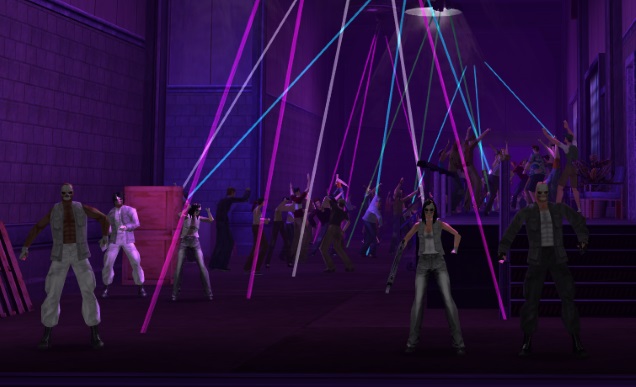 As I progress through the solo story arcs in City of Heroes, I am constantly impressed at the little quirks and tricks that the developers used to tell these storybook-like scenes. For example, in one mission, a warehouse was turned into a rave. A bunch of Skulls were partying there, but upon battling them, they decided to turn their weapons against the crowd and cause mass panic. This was both uncomfortably close to some real-life events and instrumental in creating genuine threat.

(At least no innocents died, as far as I could tell)

You like to people watch? I like to people watch, especially in MMOs where people are given wide latitude to create specific looks for the express purpose of showing off. I’m often impressed with the inventiveness on display — and how close some (cos)players get to recreating well-known outfits and figures. On the left, Starcraft Ghost’s Nova. She even had the signature large sniper rifle. Well done.

I gotta say… I really, really hate the speech bubbles in CoH. It’s too bad the developers couldn’t have sprung for comic book-like ovals and the like. These look like the first draft of something that would be made a lot better. Maybe the new owners will try their hand at small improvements like this?

Oh! And here is something cool/embarrassing/silly. The Homecoming team named one of their temporary test servers after yours truly. Don’t know why, since I didn’t really do anything to bring this game back or get this organized, but I’m honored all the same. It’s my weird 15 seconds of internet fame.