(This is part of my journey going playing through 2010’s Fallout New Vegas. You can follow the entire series on the Retro Gaming page.)

It’s time for a brand-new retro gaming series here at Bio Break, and I was in the mood to tackle an RPG once more. Out of all of the titles I have sitting around, one popped out at me that (a) had developed a strong cult following and (b) I have never actually played before. And that is Fallout New Vegas.

This was a 2010 spin-off by Obsidian, not Bethesda, that was notable both for its very buggy state and its generally better “Fallout feel” than both Fallout 3 and 4. Maybe it was the fact that it stayed out in the American Southwest (shades of Fallouts 1 and 2), or perhaps it was a simply better designed and written game. As a big fan of the Fallout franchise, I’m really psyched to be trying this out for the first time! It’s probably going to be a lengthy series, but that’s OK — I have no where better to be at the moment.

I still get goosebumps every time I hear Ron Pearlman growl out, “War. War never changes.” at the start of the Fallout games. This beginning is different than most of the other Fallout titles in that my character doesn’t start in one of the underground Vaults but rather is a courier who is waylaid by some ne’er-do-wells outside of New Vegas and then shot through the head. That’s the start of the game. You’d think that’d be the end, but somehow I survive that and being buried alive. Not quite sure how, but I’m not complaining!

If war never changes, neither does the butt ugly character creation options that these games have. That up there is seriously the absolute best I could make a character — the females, in particular, look bizarre, like an alien stretched a human skin over a weird skull.

So instead of being dead forever, I wake up in the house of Doc in a quiet Mojave town. The house serves as the character creation process, and it’s pretty well-integrated as Doc gets to know who I am and I absolutely rob him blind of everything not nailed down.

Then — and here’s the worst part — I sell it all back to him. He didn’t seem to mind, and I needed the bottle caps. 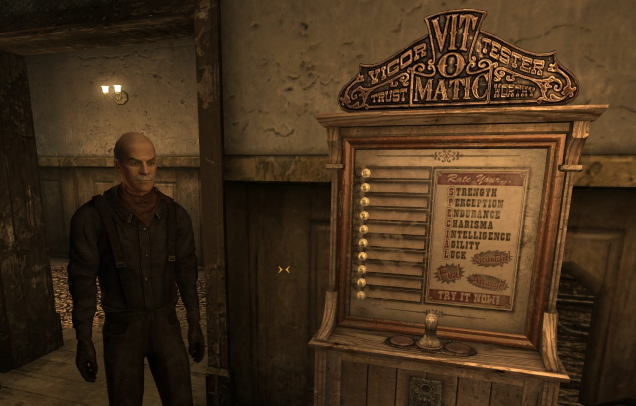 By far, my favorite part of Doc’s house is the Vigor Tester, which is a stat allocation screen disguised as one of those old timey Western saloon games. The animations, descriptions, and labels on this are arresting and even hilarious (I particularly loved the descriptions for luck). I’m going for an all-around useful character build, as usual for these games, although I do make one unorthodox decision…

I’m sorry, but when a Fallout game gives you the option to toggle on bizarre encounters, you take that with a polite “Thank you, ma’am” and don’t look back. I am definitely not “the serious of temperament.”

It’s actually really easy to get geared up even before I leave Doc’s house. It certainly helps that there are weapons, ammo, and food lying around, and Doc gives me a bunch of bobby pins, a Pip-Boy, and even an old Vault-Tec jumpsuit before I head out. I can’t tell you how excited I am at this point — let me at this world already! 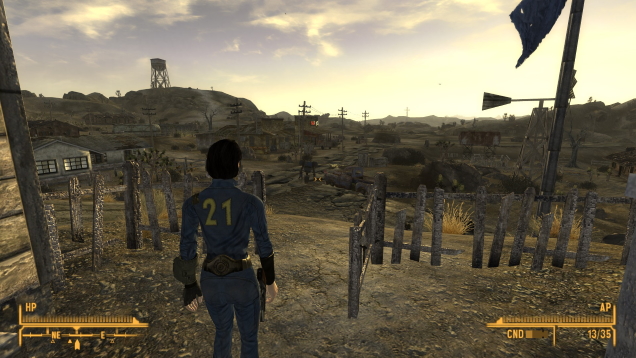 And so I step outside with a new face, a song in my heart, and vague instructions to head to the saloon and make myself useful. This right here reminds me so much of the soon-to-be-shuttered Fallen Earth that it hurts a bit. All in all, a good beginning to what I hope will be an epic journey.

4 thoughts on “Fallout New Vegas: Waking up with a splitting headache.”