(This is part of my journey going playing through 2010’s Fallout New Vegas. You can follow the entire series on the Retro Gaming page.)

I am torn between two desires as I push further into Fallout: New Vegas. The first is to roam forever and fully explore this game map. The Fallout games are like catnip for explorers and completionists, and it does drive me a bit batty when I don’t get to see 100% of everything out there. However, the second desire is to push forward in the plot and make headway on actually completing the game. I don’t want to be in here forever; there are too many other worlds to game (and blog) about!

So I gave myself two weeks to explore. Two weeks to roam aimlessly, pursue unexplored map markers, and level up a tad. It was a good time, more or less, although I didn’t really encounter a lot of super-noteworthy locations. Mostly I shot up radscorpions and got ambushed a few times by the Legion.

And I found this adorable painting. Truly, New Vegas is the burgeoning art scene of the future.

What is a little weird to me is how the world around me seems to be all caught up in this relatively small saga of a rogue courier (me) who somehow escaped death and is now acting as judge and jury over the American southwest. I do like to listen to Radio New Vegas while I play, because every once in a while the DJ will talk about some of the things I’ve done and how it’s impacted the communities. 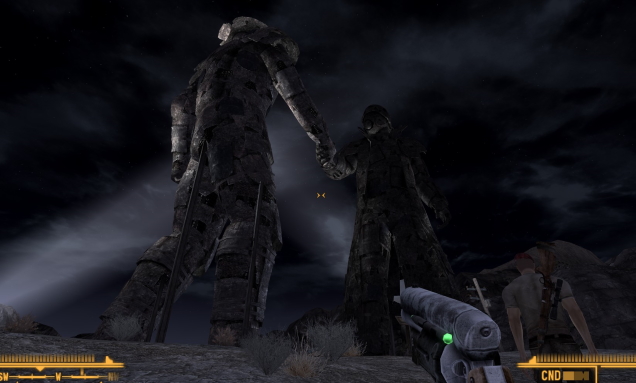 There is a lot of opportunity during wanders and quests to form opinions of the major factions in the area — namely the Legion, the NCR, and the Great Khans. There’s some good and bad to all of them, although the Legion do seem to be more evil than the rest and the NCR a tad more law-abiding and Boy Scoutish than the others. I particularly liked the above statue at the NCR camp commemorating a great alliance of yesteryear with the Desert Rangers (a nod to Wasteland, I assume).

Meanwhile, my character is beefing up in all sorts of great ways. I’ve accumulated several perks, both from leveling and from hitting various achievements. I am Lord Death now, since I’ve killed so much. That’s going on my business card.

I did swap out Boone for a different companion that I met at a trade stop. Veronica here is a member of the Brotherhood, and I went with her because she seems a lot more personable than the grunty Boone. Plus, she punches things to death with her robot fist, and that never gets old.

Back on the trail of the main storyline, I made my way to Boulder City to broker a peace between the NCR and the Khans in exchange for some info about the jerk that shot me.

See? Everyone seems to know me. I’m like tabloid fodder for the apocalypse. I’m still confused why Benny wanted to kill me over a platinum casino chip, but hopefully I’ll find out some day. 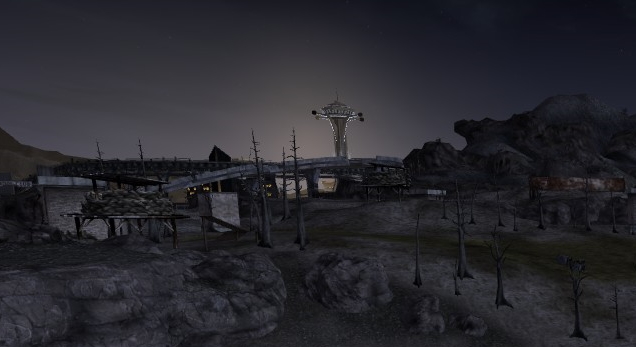 Turning my back to Boulder City, I head into New Vegas proper for the first time in the game. Its bright lights beckon to me — but is it a warning against imminent peril? TUNE IN NEXT TIME FOR RETRO GAMING DUN DUN DUNNNN