You know that scene in Fellowship of the Ring where Sam stops in a field and has that realization that if he takes one more step, he’ll be the furthest away from home that he’s ever been? I had my own Sam Moment in FFXIV last week as my character finally caught back up to where my original character was — and then pushed deeper into Heavensward than I ever have before.

It was actually a really good feeling. I’m not blazing on fire for FFXIV, but ever since my re-return a month or so ago, I’ve been wondering if I would be interested enough to catch up to where I used to be. It was a tiny bit of a grind getting Mechinist up to scrap — and then, hilariously, I switched back to Scholar anyway because I liked having a healing fairy at my side — but overall I didn’t experience much difficulty getting here.

I want to get through the entirety of Heavensward at least to give the much-vaunted story a real chance. Fans rave about this expansion as being the start of the “real good” stuff, and so far? Well, it’s not horrible, but it’s not page-turning excitement either. At least Alphanerd got a coat to cover his weird pants-tights he has going on. And any scene with Tataru is gold. And the ninja girl is more than tolerable.

Part of my middling feelings is that right here is the narrative nexus between dragons and elves, two things — you might recall — I am less than enthusiastic about. I’d be alright if Heavensward ends with the dragons eating the elves (one does, but it’s sort of a love thing? They kind of lost me with that.) and then the dragons dying of indigestion. Listening to people fawn all over majestic sky-lizards hurts my eyes from the rolling.

At least I’ve gotten to the point where my small party is on an actual journey instead of dithering around in zones and then returning to Ishgard for yet another pow-wow in the Count’s quarters. The forward momentum makes me want to log back in to see where I go next and what happens. 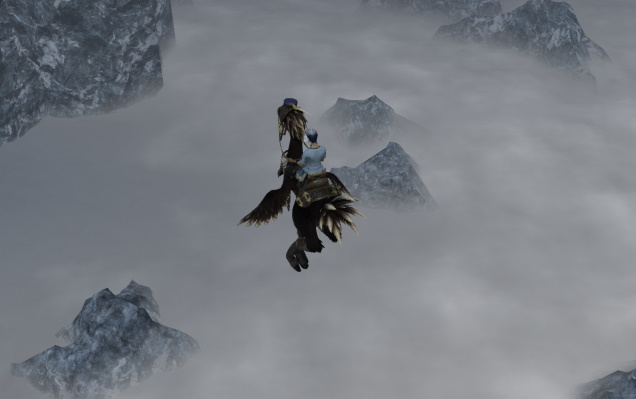 So here’s something cool: I finally got to fly in FFXIV! I took a few minutes to figure out the aether currents system, which fortunately proved to be a lot more straight-forward to navigate. Basically, you unlock flying zone by zone. There’s about 10 or so exploration points you have to find and five quests to do, and that’s it. Ding! It’s only slightly gated (with the quests appearing at a point in the MSQ), but I felt like I unlocked it at a good point without being strung along for too long.

Compared to World of Warcraft, flying itself in FFXIV feels slightly more clunky, but that’s true of a lot of this game’s controls. It works, but it’s not as… tight as I’m used to in WoW. I did have fun zipping around the zone, exploring the spots on the map that were hidden, and checking out things from a high vantage point. Good stuff.