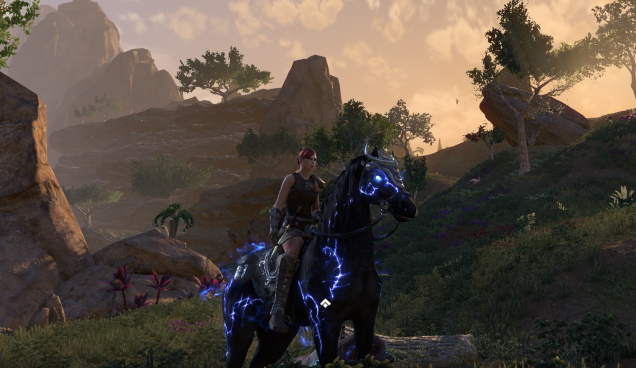 Out of all of the ways to be drawn back into an MMO, I wouldn’t have expected a trivia contest to do it.

So here’s the weird story. Every night I sit down and cycle through several MMOs to grab daily rewards for if and when I might come back to the game. When I did so in Elder Scrolls Online, I noticed that my guild (which is, of course, squid-themed) was four questions into a trivia contest. Well, I couldn’t let that go by, so I sat there and dominated the rest of the game (I may not be smart, but your boy can do trivia like no one else). We were laughing and chatting, and since I was sticking around, I also started questing.

Well, that led to actual play engagement — which led to actually wanting to play. Nightly. Regularly. So there you go — daily rewards don’t get me to play, but a silly guild trivia contest? That’s the ticket.

Anyway, it’s actually been really great to slide back into ESO. With the new(ish) zone guide feature, I’m able to see how many quests that are left in any given region, so I’ve been puttering around Northern Elsweyr working on finding the few that I overlooked and chomping through them.

I have to say that I’ve really come to appreciate ESO’s storytelling on many levels. Not only are these usually self-contained tales (rather than enormous, sprawling ones), but the voice acting, the scripting, the variety, and the resolutions offer me a lot more than I usually see in MMOs. And I actually *care* about the stories, which makes a difference. FFXIV might have great storytelling, but when you don’t really care about the world or the tale being told, then it doesn’t matter how well it’s packaged.

So really, the only obstacle to full enjoyment and engagement in ESO is and continues to be combat. I can keep wishing in vain for things like auto-attacks and more visceral blows, but there are things I can control. One thing was turning on damage numbers, which were off for some reason. I like seeing that feedback, especially for AOE attacks. Another thing is that I’m trying to build my Warden to being a 100% spellcaster, rather than a spellcaster/melee hybrid. I don’t like smacking things around in this game, but I am finding enjoyment in just throwing down AOE fields and DOTs. So I’m going to stick to that.

I think it’s a really good time to be getting back into this game, what with Greymoor coming out today. Even though I have just tons and tons of other zones and content to do, I pre-ordered the expansion because I knew it would kill me not to be adventuring there with everyone else in the summer. I’ve also done the prologue quests, which at least start to get the player in the mindset of heading to Skyrim to fight vampires.

I also can’t wait to try out the new Antiquities system. That seems like a really great way to repurpose zones and add non-combat activities into the game, and I’m down with that. I should also work more on my house, since I haven’t done much with that since I initially set it up.

Anyway, great to be back in Elder Scrolls Online, particularly this month!

One thought on “Elder Scrolls Online: The Warden rides again”