Hands up if you’ve seen an advertisement for a mobile game that looks similar to the graphic above. The Flash-looking ad tends to show someone who is trapped in a precarious situation or trying to get to treasure that can only be achieved my manipulating the on-screen elements in a specific way. It’s an intriguing-looking puzzle, and the ad usually is animated and will show the puzzle failing while daring the viewer to download the game and do better.

And when said game is actually downloaded, it has absolutely nothing in common with those ads. It’s a completely different game, or a different type of puzzle game.

I’ve seen a lot of misleading gaming ads — anyone remember the hilarious run of Evony’s “Play Me, My Lord” a decade or so ago? — but this specific type of ad has been popping up on mobile, Facebook, and all sorts of other places for a while now. I keep bumping into it, and as a result, it’s become a major pet peeve of mine. 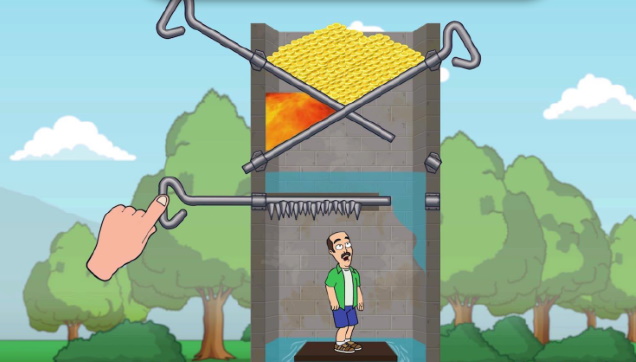 It’s not that it’s such a blatant bait-and-switch that is easily uncovered the second you actually go see what the real game looks like. It’s that these ads actually depict what might make for a pretty interesting game.

When I first saw these types of ads, I did make the effort to look up the game, because I thought it seemed to good to be true that a company was hand-crafting different levels of puzzles like this. I hoped it would’ve been real, even so. But no, it’s not. The games that these ads promote are almost always dumb match-3 trash that can churn out a million levels in rapid succession.

So why do these ads exist even after we’ve seen through the veil? There’s a lot out there on this particular phenomenon, and it all boils down to one actual truth: Bold lies pay off. It gets attention and eyeballs on a product, and if a percentage of those people lied to stick around to play, then you convert them even though you lied to them.

I’m not that up on advertising rules and laws, but this does seem to be a type of advertising that is forbidden in many other areas. Companies are prohibited from flat-out advertising one product or service and delivering a completely different one. Why is this different? Maybe not so much regulation or oversight, I don’t know.

At least one company noticed that these fake ads looked pretty cool — and actually made a real game from them called Hero Rescue. So I guess if you say a lie long enough, it becomes true?

Still annoys me that these ads exist, though.