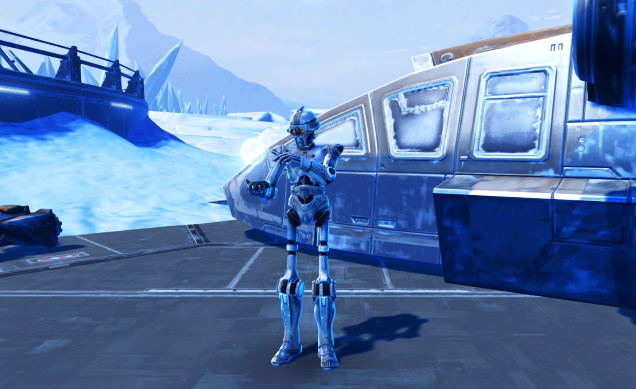 The other day I saw DasMoose tweet on SWTOR: “Do you know why Legendary is so special? It’s not getting every class buff across any character. It’s not for titles or achievements. No, that’s not why it matters. You went through Hoth at LEAST 8 separate times and retained your sanity.”

And I was like, aww, I like Hoth! Coincidentally, I’ve been going through Hoth right now on my Sniper, trying to cast off her chemical brainwashing while dealing with not a few uprisings and scavenger hunts.

I’m not entirely sure if Hoth has a terrible reputation, as DasMoose seems to indicate, but I’ve always thought it was one of the better planets in the game. For starters, I love winter zones, and Hoth is a good one — starkly beautiful with lots of shades of blues and whites all over the place. There’s frost on windows, ice in the underground bunkers, wampas frolicking left and right. It just *looks* cold, and that’s a good accomplishment for the art team.

It’s not a visually complex, but there are some notable landmarks — most significantly the frozen spaceship graveyard. I just like cruising around Hoth to see what there is. 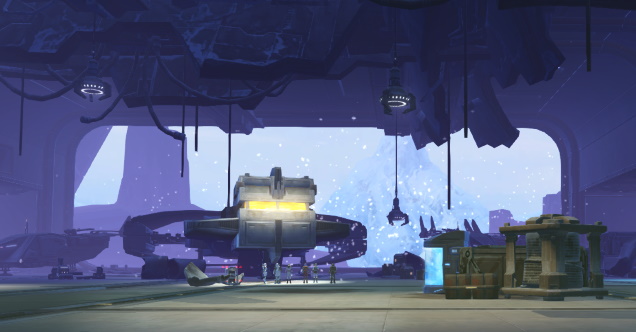 Plus, Hoth draws heavily upon the setting and nostalgia from The Empire Strikes Back, and who doesn’t love that movie? The opening battle is one of the most iconic from the movies, with zooming snowspeeders and unstoppable AT-ATs marching on. I always felt like the choice of Hoth as a Rebel base suggested that the Rebels were at the end of any options and had to make it work. It didn’t look safe and cozy; it was hostile inside and out.

That’s an interesting setting for me and one that I was glad to revisit a couple of times in SWTOR. I can tell you that there are other planets that I like a whole lot less than Hoth, although I’ve never actually sat down to do a ranking. Hm. Maybe that’s a project for another day.