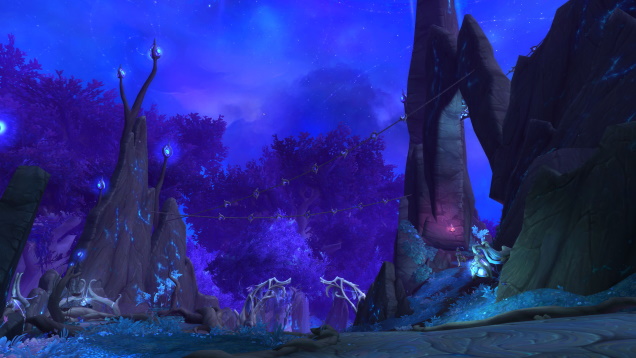 Two weeks, two days. That’s how long it ended up taking me to get through the first four leveling zones of World of Warcraft’s Shadowlands. It’s a little faster than I had anticipated, but still way, way slower than many others I’ve seen.

Some of my guildies are absolutely gaga over Ardenweald, and it’s clearly a zone that’s designed to be visually impressive and attractive. Lots of blues and purples and swirly trees and ain’t nature amazing?

But for me, it was too much, trying too hard while not really delivering that great of a narrative arc. I think it’s because WoW has dipped into the well of “beautiful nature corrupted by local evil, please go exterminate it and bring our flowers back” far too many times to make this feel anything other than a retread. It was fine. Eye candy, but nothing more. At least I hit level 60 in the middle of this zone, so that’s one milestone completed.

In contrast, Revendreth was a whole heap of fun. Despite being a Warcrafty ripoff of classic Transylvania/Bram Stoker tropes, it fashioned together a stunning gothic zone that’s brimming with personality. I was laughing at a lot of the quest text and quotes, especially from the little gremlin guys, and who wouldn’t find the Mad Duke a great companion?

I also found that it didn’t take any effort on my part to stay engaged with this zone’s story, formulaic though it was. I was a really interesting design decision to have the vampires (sorry, venthyr) take after the uglier looks from vampire movie history than the modern drop-dead leather model aesthetic.

As an aside, am I the only one who is wondering if there are going to be allied races that spring from any of these zones? Because I can totally see it, especially with Bastion and Revendreth.

Now that the leveling journey is done, it’s time to figure out what the endgame looks like. I want to figure out what gaming routine and long-term objectives to pursue so that I’m not wasting my time doing too much in one area and not enough in another part that would benefit me more. Plus, I’m curious if any of this will be fun on a base enjoyment level.

One thought on “World of Warcraft: Of trees and vampires”