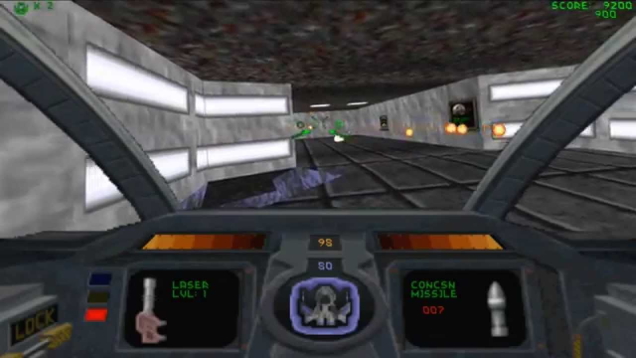 Today we’re going to take a trip in the wayback machine to 1994 for a pair of shooters that popped up on a number of gamers’ PCs — myself included. The Doom craze really lit a fire under the development of a lot of copycats, but the most interesting were the ones that genuinely tried something different.

Descent definitely accomplished this. Instead of running and gunning as a person, the player was put inside a small spaceship that would careen down the corridors and rooms of asteroid bases. The innovation here was, essentially, making the shooter a flying character. Attacks and action happened in three dimensions, not two.

It definitely made for wild level designs, although it was also really easy to get lost and turned around in some of these places. The 3-D map helped, but honestly, I didn’t want to stop the action to try to figure out a GPS.

The action here was fairly decent, with different weapons and shields and whatnot. The goal of each level was to find the base’s self-destruct button, hit it, and then turn around and race for the exit. That was a nail-biting moment, especially if you didn’t completely clear a level or memorize the path to the door.

I really appreciated that Descent had silky smooth gameplay, but the generic bases and robot enemies took away from the personality that so many of these shooters had. 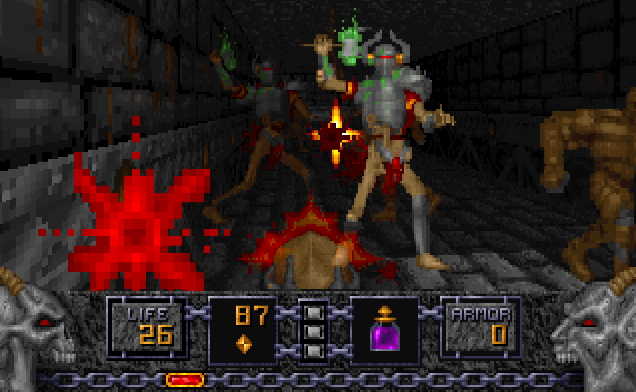 Of course, if you wanted personality, you could just boot up Heretic. This was very much a Doom clone, only with more of a fantasy splatterfest theme. It had a few interesting innovations, such as being able to look up and down and fiddle with an inventory, but the basic Doom gameplay loop was in full effect.

I think that Heretic’s big appeal was simply its heavy metal fantasy tone. We really dug that sort of thing in the mid-1990s. I guess it felt rebellious? It certainly was too cartoonish and pixelated to feel real.

I never played Heretic as much as Doom and some others, but that’s probably because I only had the initial shareware episode. Looking back, I wonder if this had any impact on the development of Blizzard’s Diablo, because both seem to revel in this grimdark atmosphere.

One thought on “Nostalgia Lane: Descent and Heretic”