(This is part of my journey going playing through 2016’s Rimworld. You can follow the entire series on the Retro Gaming page.)

As the fall heads toward winter, the struggling Bio Break colony starts to show signs of actual survival. All three members are up and working with minimal injuries, hunting down muffalo and elk for meat and leather. The newest colonist, Bentley, proves to be a great shot with the revolver, and food finally looks like it’s no longer such a dire concern.

Ahaha I spoke too soon. Lozano snaps — again — and starts wandering off in a daze. Normally, I’d let him be, but it’s so cold that he starts developing hypothermia and frostbite. The only way I can get him inside is to arrest him, which is a dicey prospect. Wallis takes the job, and the two tussle until both are bleeding and Lozano is back in the base. Bentley, meanwhile, breaks and goes on a food binge. I guess there are worse ways to have a breakdown.

A big part of the problem here is that I’m not quite at the level of basic survival that I need to be right now — nevermind providing niceties and luxuries to make everyone’s mood better. So the colonists’ mood keeps dropping and people keep snapping. It’s a bad cycle.

Two small strokes of fortune: The jackets I made at the tailoring bench are helping stave off the cold, and something or someone killed the nasty timber wolf that was stalking the area. For food, the colony is now depending almost entirely on herds of muffalo, caribou, or elk passing by.

It’s proving to be very difficult to keep Lozano in a good mood, especially as his grief for fallen friends and a dead dog continue. Once again he breaks, but this time it’s with an eye to stab Bentley to death. Once again, the only recourse is to try to arrest and detain Lozano before he can do much damage.

This… does not go well. Lozano puts down Wallis and Bentley with savage ease, leaving them bleeding to death in the snow while he huffs and puffs. All I can do as the player is watch my two sane colonists twitch on the ground and hope that Lozano snaps out of it fast enough to enact a rescue.

No man-in-black-type situation here; Wallis succumbs to his injuries and dies at the hand of his brother.

Lozano eventually comes out of his rage, exhausted and losing an ear to frostbite in the hard snow and -24 degree temps. He grabs some berries to eat and struggles home, but collapses along the way. After a few hours, he wakes back up and gets home. 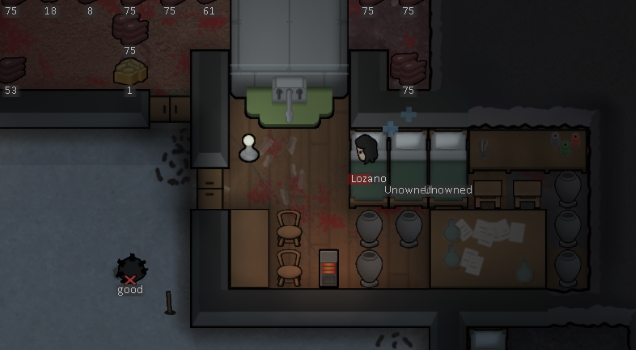 The next day is the first day of winter. Snow piles against the sides of the mostly-empty colony. The murderer Lozano sleeps in a bed, trying to heal while he enjoys two days of catharsis before his mood dives again. 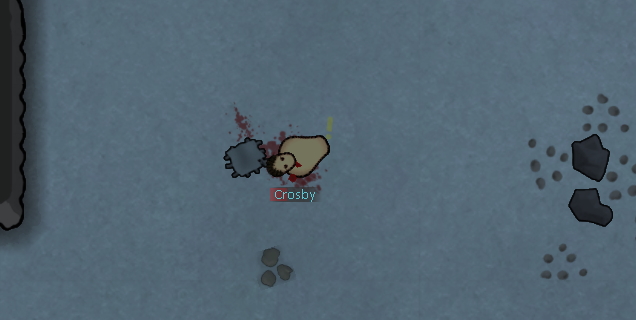 A glimmer of hope arrives with another transport pod crash and the release of another prospective colonist. But Lozano is too far gone in a daze to come help, and Crosby — sweet, sweet Crosby — dies alone in the snow, unrescued. 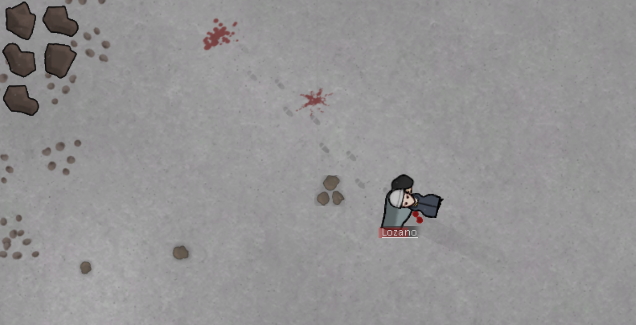 I keep thinking the game is over… and then something happens to give me a slight chance at continuing. Lozano heads out to ambush a rebel assault, and in the process, he’s able to capture — instead of kill — the rebel. This gives me a shot at converting him.

But what I didn’t think about was Lozano’s state. Turns out that as he’s capturing the rebel, Lozano is also bleeding pretty heavily. On his way to grab more medicine for the prisoner, Lozano collapses in the storeroom and dies on the floor, the last of my colonists.

And that’s the end of this colony’s story. Not very inspiring, was it? The tundra locale was a huge obstacle from the very start, but having a character who kept breaking didn’t help either. I think that there were a few moments when I could’ve made it through the first year if things hadn’t gone wrong, but there was one too many problems, and a colony collapse proved inevitable.

Hope you enjoyed this playthrough! Next week, we’ll start a brand new game — and this time, it will be a genuine retro experience, I promise.

3 thoughts on “Rimworld: The odds of survival”