For my next leg on the Great Game Tour, I’m going to dive into the inspiration for this series — Space Haven. Here’s a title I was drooling over while it was in development, but when I finally got it and installed it, I never worked up the energy to launch it and figure it out. But considering that it’s been called “Rimworld in space,” I knew I should. So here we go!

So this is another one of those Rimworld/Dwarf Fortress colony simulators, only this one starts on an abandoned mining platform in space. The initial goal is to transform it into a spaceship and then start cruising around, looking for resources to survive. While I love Rimworld, that game had a steep learning curve, and I’m worried this might be the same.

Fortunately, there is a tutorial here, which I gratefully clung to while I poked around the different menus and tried to get a handle on the ecosystem that you’re supposed to make on this ship. I kind of figure that a YouTube video explanation or two might be in order. But hey, I have oxygen, power, and heat, so they’re not dying right away! 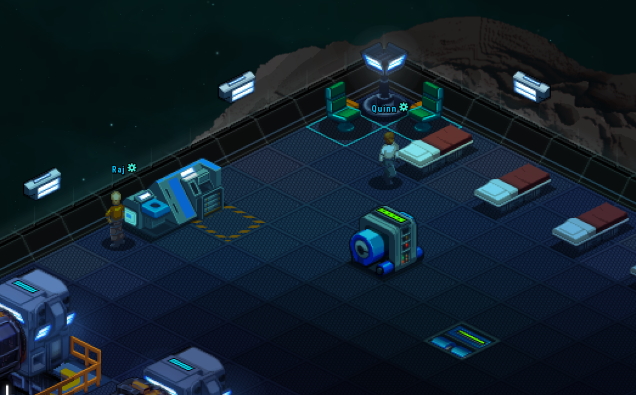 It’s not pretty, but at least basic facilities — like toilets! — are going in. This is kind of giving me an eye twitch with how messy and disorganized everything is. I wish you could start clean and lay out the ship room by room rather than slap stuff down and rearrange it (?) later.

Happily, there’s a very similar design going on here to Rimworld — if it ain’t broke, copy it like crazy! — and it’s more or less intuitive. I think the little crew are going out and mining the asteroids all by themselves, I’m just trying to make sure that their time here isn’t wholly miserable.

Also — and this is neither here nor there — it highly amuses me that they all stand in line to use the potty.

And I’m mining! Cutest mining pods *ever.* Not too keen on the visuals of the asteroid/resources. Kind of feels placeholder.

First impressions? Space Haven is a good-looking game that doesn’t really deviate that much from the Rimworld formula, toilets aside. I like the aesthetic a lot more than Rimworld’s flat design, but I was hoping that Space Haven would inject more personality into its pixelated characters. They sort of talk with symbols, but I never got the sense that they were people so much as automated work machines.

It’s definitely a title to come back to in the future, although not as high a priority as I might have hoped.