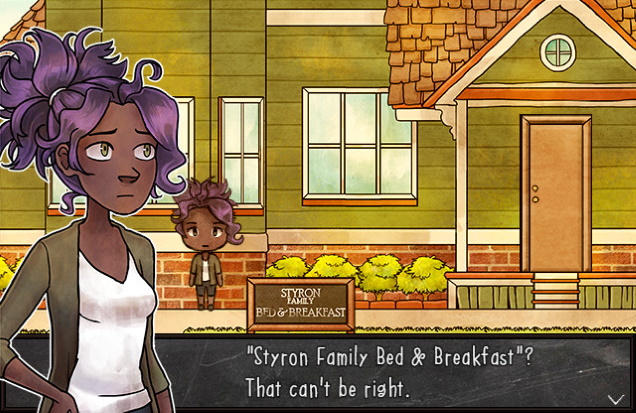 Remember that insanely great $5 Itch.io deal they ran for charity last year? I’ve had dozens upon dozens of these titles sitting on my hard drive waiting for a small slice of my time, and so I picked one at random: Dead and Breakfast. Apparently it’s about running a B&B with ghosts.

So yeah, I played this all the way through start to finish. It’s a fairly basic adventure game that has a girl homesitting for a woman who just lost her son and is in the hospital. It turns out that said girl (Corinne) can see ghosts — and this particular house is a ghost magnet. Very slowly over the course of seven days, Corinne gets to know the four ghosts living there and works to help them move on. She also meets some of the locals and does a whole lot of chores.

That’s… pretty much it. There aren’t any really tough puzzles, as the meat of the game is trying to fulfill all of the chores that’ll make for the best ending — and that means cooking and gardening. This is easily the weakest part, as it’s not engaging. It’s just busy work, as clear as day, meant to stretch this hour-long story to two hours.

And while the characters are somewhat charming, I was hoping after a while that there’d be more depth to all of them — but there wasn’t. Everyone’s story is pretty basic, from the little girl ghost who just wants to play to a glutton who just wants to eat. I pushed all the way to the end thinking that there was going to be this great resolution, but it was as tepid as the rest of the narrative.

There’s some charm here, and it’s not a complete waste of time, but I think I could’ve quit at about 15 minutes and not really missed much. But hey! First time I completed a title for the Great Game Tour, so that’s something!