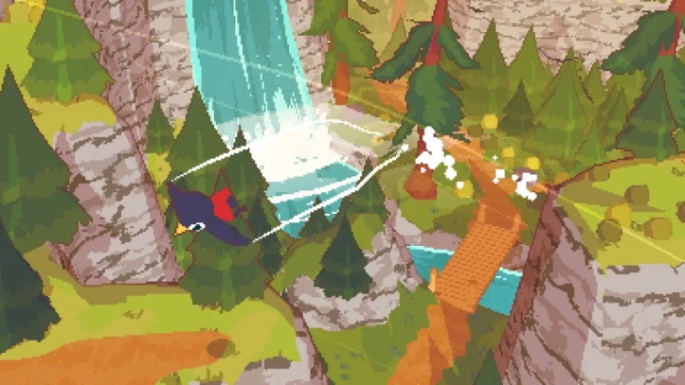 For Day 6 of the Great Game Tour, I’m going to finally give in to the growing chorus of people that have urged me to give A Short Hike a short try. Considering that I got it for free on Epic and as part of the Itch.io bundle, it’s not like I lack a copy.

In this simple game, you play Claire, a bird who’s on a bit of a summer trip to an island while her mom is in the hospital. The gameplay, such as it is, mostly concerns exploring the island and unlocking various tools to fly or climb better. There are also several NPCs you can interact with and elect to help or join up with. For instance, I joined a rock climbing club, went fishing, and assisted a marathon.

But mostly it’s just running, climbing, and gliding. The game has a really neat 3-D pixel-art aesthetic that’s inviting and colorful, and I was pleased that the platforming wasn’t TOO annoying. I only found it such when I had to run diagonal and ended up falling off cliffs or whatnot. However, since you can easily climb or flap back up, it’s not usually a big deal.

A Short Hike definitely is a more peaceful game that invites you to relax and just experience stuff rather than power game to the ending. I guess it’s a test of your gamer personality, whether you’re open to being sidetracked and enjoy poking around, or if you really want to gun for objectives.

I’ll be honest: I thought it was a little on the boring side. It handles fine, it does what it does well, but there isn’t much here of substance. There isn’t a lot of narrative to compel me to keep playing, and one can only poke around for so long before feeling like one got what one wanted to get out of one’s gameplay session.