It’s 10 years later for my Wildermyth party (who are now in their early 30s), the Bringers of the Things We Lost, and they are setting out once again. This time it’s to investigate the mother gorgon that they heard about previously, to see if they can track down the threat before it overwhelms the land.

On the way, however, Geeve decides this is a good time to bury the ashes of a storytelling friend. It’s a sweet little tale as the crew finds the spot where the storyteller wanted to buried, fight off a few bad guys, and in the end decide to enjoy nature rather than recall old stories. 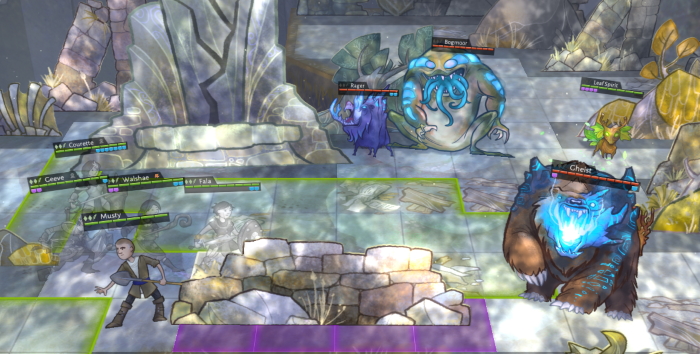 Gorgons are finally spotted in some ruins, where a farmer is wandering around monster country. I’m getting better with the combat scenes, grouping up my party for added protection, forming a shield wall with my paladins, and using my mystic’s infusion ability to turn the environment against the bad guys. I love infusion, it’s really so much fun. After the fight, the farmer said that he’d heard of some sort of shrine that lends people extra power, so he’s been coming up here to try to access it and use it to protect his family (and goats).

The farmer chickens out of using the Stormwell, so Walshae does it instead. She gulps this magic water down and gets a big glowing star on her forehead. This makes the third party member I have with some sort of facial deformity. Just hope it was worth it.

With less than 300 days to get to the root of the Gorgon problem, the party heads to unknown territories. Along the way they stop in Pebbleham, where they pick up a fifth party member — Galadiel, a hunter who’s got a boasty mouth on her. I like her already. And then I promptly forget her in the town, which I don’t realize until I’m three tiles away, she’s not equipped, and I don’t have the time to go back and get her. What is my life?

Welshae encounters an ox with a strange growth on it. It talks to her mind, sketching out a map to the enemy before asking the party to put it out of its misery.

Let’s see… lot happens in this next tile. The company gets trapped in a cave, finds a mysterious underground temple, swipes a book, causes a second cave-in, then emerges to attack a group of baddies. Oh, and Walshae catches a cute little water spirit and forces it to transform into a stronger magic staff, because that’s what you do with cute things — make better loot.

With a single day left — yes, I was cutting it close to the wire — the company finds the big sentinel boss, claws, paws and all. Defeating it nets the team a tier 3 spear — and an endless wave of gorgons. All seems lost:

The company starts to make a run for it through a gauntlet of monsters in order to reach the exit on the far side of the map. I am on the edge of my seat right now, I kid you not. After a nailbiting set of rounds where everyone takes damage and dashes wildly for the exit, the company emerges from the cave system victorious — and with a weapon that buys them some time. Ten more years follow.