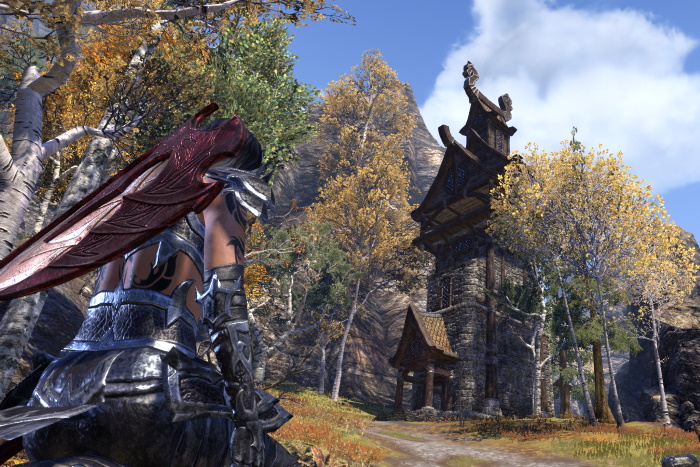 This is apropos of nothing, but I think Elder Scrolls Online is the MMO where I see the most guild recruit messages, period. Some MMOs? It’s almost impossible to find a guild. Here, you’re stumbling over them left and right — and you can join multiple guilds, if you desire. It always makes the game feel like it’s hopping.

Anywhodiddle, after a month spent slowly but surely working my way through The Rift, I finally finished up the zone. It was fine-to-good, I’d say. Generally lovely outdoor scenery, but too many quests that were obsessed with the “Worm Cult” that, to my knowledge, never once did anything with a worm. That’s disappointing. If there was a time to summon giant Tremors-like worms, this would be it.

But as I said, it was not a waste from a tourist perspective. I liked poking around the various delves, above and beyond for skyshards and bosses, even if all I was usually rewarded with was eye candy.

Such as this poor sap that got suckered into the worst job ever and then died doing it, leaving his skeleton to keep up the task.

In any case, it’s on to Western Skyrim. That’s a zone I’ve partially done before, but not to completion. I will probably pick up the other Greymoor DLC pack so that I can experience the full storyline, but maybe not until the new year.