I feel like I have Star Wars on the brain lately. It’s nothing to do with the newer Disney stuff, I can assure you; it’s more just being away from that IP for a while and kind of missing it. And speaking of being away for a while… I also feel those heavy World of Warcraft twinges now and then. It’s been a good while since I’ve been back in Azeroth and there’s something about how WoW’s combat and characters feel I currently wasn’t getting.

Both of these ended up subconsciously and then consciously prodding me in the direction of another MMO, one I haven’t played seriously since almost a year ago. I flirted with a new character back in October, but it didn’t stick due to time reasons. However, this month I dove back into SWTOR and found a perfect solution for what I’m craving.

I splurged to buy a race that I thought looked nifty — the Nautolan — and made a new Gunslinger for some fun adventures in a galaxy far, far away.  I really dig her look, and went with a generally nice if snarky attitude for her interactions.

It’s been a whole lot of fun slipping right back into this game, especially after I found a guild that was just right for me. Chatty, active, not too big, not too small. My first night with this crew and we were planet-hopping to do world bosses. It was a whole lot of fun and fulfilled some of my social gaming needs I’ve been lacking as of late. 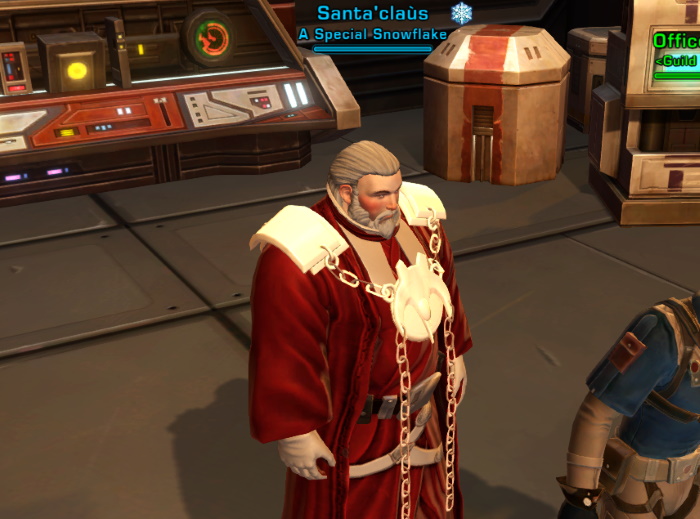 A few days before I found the guild, I found Santa Claus. This guy was recruiting some “little helpers” to assist him in forming a one-person guild. I got paid 5 million credits for just standing around for five minutes, which wasn’t too bad at all. And that way I could use a million right off the bat to unlock HK-55 from my legacy panel to use as a companion.

I’ve had a good time playing a screenshot tourist, too. I love the colorful worlds of SWTOR and keep pausing to soak in the details before leaping back into the fray.

With the new expansion on the horizon, I have hopes that I might grow some roots with this game and character and actually stick around to make it through all of the content. That would be an amazing journey in 2022, that’s for sure.

2 thoughts on “SWTOR: Returning in style”