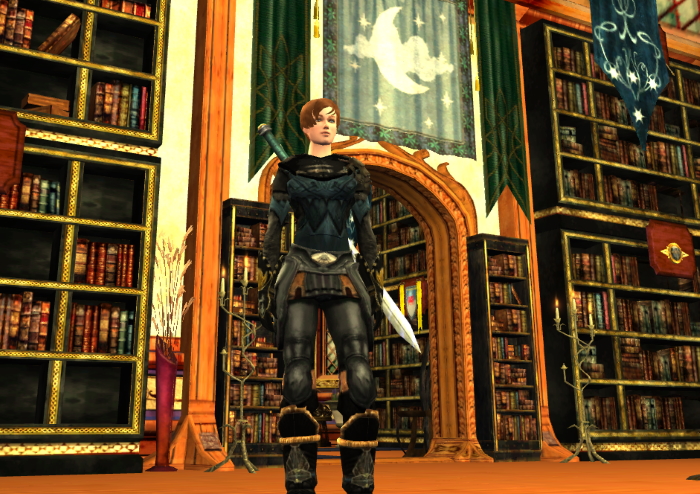 It’s been many months since I played my Landroval Captain, but it was good to be back in her steel-capped boots. Unfortunately, she was a hot mess of inventory glut, a legendary item that really wasn’t suited for her, and virtues not capped. So I set aside that first day to do nothing but get her sorted out.

I swapped my spear for a sword. Don’t know why I didn’t think that it’s madness to use anything BUT a sword with the Man racial trait, but that’s my foresight for you. Inventory got sorted out, although I realized I was going to have to devote some time in the future to doing some spring cleaning in my wardrobe. I have 300/300 slots filled with a lot of items waiting to be added.

For my virtues, I took an unorthodox approach. I boosted a lowbie Hunter solely to cannibalize the virtue XP boosts that came with a Valar. That was far easier and faster than running all over Middle-earth doing extra deeds that I didn’t want to do at the moment.

With all that figured out, I dove back into Gundabad. I remember now why I pooped out, because the Deepscrave zone is a navigation nightmare with its huge spans and staircases and whatnot. But I gritted my teeth, picked a quest, and started plugging away at it once more. At least one good thing came from this: I dinged level 138 as I was slaughtering my thousandth orc in the zone. AND it ultimately didn’t take too long to finish it up, especially when I found the elevator that I really wish I had known was there in the beginning.

It was also heartening to connect back up with my old kinship, the Lonely Mountain Band. Lovely folks and still pretty active.

Last week’s producer’s letter felt a little middling to me — no new zones on the horizon, no new high-level content. But there will be a new mission series, which is something. The most notable item in it was the expansion of class/race options. Several new options were there, including one I’ve wanted for so long: Hobbit Lore-masters! So this September, I’m definitely going to be rolling up a pint-sized pseudo-wizard and getting to work on a new journey.

It is a little bit of a bittersweet moment to hear that Anor is going to be shut down. I poured a lot of time into that Hobbit Minstrel (hey, waitaminute, am I just repeating history?), not to mention gobs of LOTRO points. My only consolation here is that the transfer should pack up my premium house and let me transfer it to Landroval.