For my new MMO of the month, I’ve decided to give the recently “released” H1Z1 some attention for a couple of reasons.  First, I wanted to follow up my first impressions from a few weeks back now that there have been a few patches.  Second, I kind of sense that this is a novelty game for me — interesting for a little while, but certainly not long-term.  Third, I’m in a survival game mood these days.

Once again, I was dumped out into the middle of a field, only this time there were certainly more zombies roaming.  I saw two within the first few seconds, so instead of using my flashlight I boogied down the hill and toward a sign of civilization: a gas station. 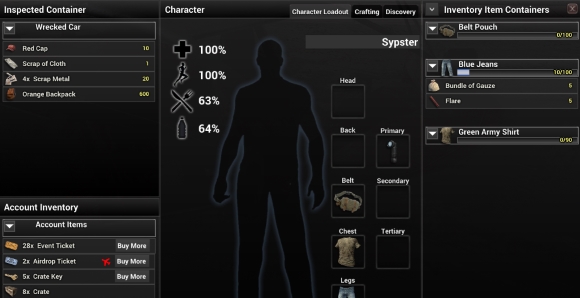 One vast improvement since last I was in the game is that there’s actual loot to be scavenged from cars and containers.  Right away I found more clothes and a useful backpack — and I would continue to accrue so much stuff that I eventually had to stop picking up some of it.  There’s only so much scrap metal a man can carry (a woman is a different story, but alas, H1Z1 has yet to acknowledge the existence of the female gender).

Aside from the backpack, my most cherished possessions during the evening were my water bottles (which I figured out how to actually fill), a hammer (punching zombies got old, and this hammer could take them down quickly), and a motorcycle helmet (to look rad).  While I did gather up a lot of .45 bullets, I never found a gun.  Alas.

My adventures for the evening mostly consisted of building hopping, as I was lucky enough to start out in a fairly populated area.  Well, formerly populated, but you get my drift.  And as I gathered up more and more supplies, I actually began to learn how to survive beyond whacking zombies in their ocular cavities.

H1Z1 has four main body stats to track.  Stamina is for running and regenerates on its own when I slow down, so no worries there.  Energy is for… existing, I guess, and needs food to replenish.  Hydration is the water side of that, and health is health.  The trick is to keep one’s energy/hydration/health up, and since energy and hydration are always draining and health can go away quickly from attacks, it’s important to keep moving to find stuff.

Tearing stuff up to make strips of cloth for bandages helped a LOT in the health department.  Each bandage throw a HoT on my character as well as stopped any bleeding I had going on.  I found a lot of canned goods along the way and never had a problem with energy.  Hydration, oddly enough, was my main concern.  Blackberries and some canned goods could help in this regard, but I mostly had to find water bottles and then fill them up at wells or dew collectors.  I didn’t care if the water was dirty or not: I drank.

It took me a while to figure out how to pop out of first-person mode and into third person to see how dorky I looked (answer: very).  The controls screen says “mouse button 4,” but according to the forums (which was correct), the “T” key actually toggles between modes.  I was playing on a PvE server with few other rules, so no forced first-person for me.

Probably the most nerve-rattling moment of the evening came when a zombie started to charge me.  I’m not scared of a solitary zombie, but I’d rather not fight them if I don’t have to, so I ran into a nearby house and turned around to slam the door shut.  But right as I clicked the key to do that, the zombie lurched through the door and startled me.

With no grander mission in mind, I slowly worked my way toward a church that dominated the landscape.  I’ve always loved checking other churches out, both in real life and in games, although this one was as baren and ramshackle as most of the houses.  Maybe SOE, er, Daybreak (ick) has plans to add a lot more story elements into the world, but as it stands right now there’s so little personality in any of these places.

You can also see a player structure up there by the church.  I saw a few of these during the course of my journey, and all were quite ugly, like giant chicken coops.  Zombie proof, mayhaps, but I wouldn’t want to be stuck in one.  When the server stops wiping, will we see an endless field of player chicken coops?  I’d rather move into one of the houses.

I lit a campfire.  I am absurdly pleased with myself.

I didn’t encounter too many players that evening — mostly just ships passing in the night.  There was one dufus who ran up to me yelling into his mic “COME ON!  COME ON!  GIVE ME A REASON!” while he kept punching my character.  This being a PvE server, that did nothing other than make my character flinch and me laugh.  Is there consensual PvP on these servers?  I didn’t stick around to find out.

Despite having been underwhelmed with my first serious dip into H1Z1 — it is early-squirrelly alpha access, after all — it’s not going to leave my desktop any time soon.  I think it has some great potential as an MMO version of the increasingly popular survival game genre.

Why are these games grabbing our attention and spawning a legion of wannabes?  I think a lot of it has to do with the opporunity to be a different type of hero than we’re usually offered in online games.

Instead of hewing to a gamer’s fantasy of being an altruistic hero or an ultimate fighter (or even a wealthy merchant), these types of games strike right into the heart of the fantasy of the survivor.  Instead of beginning as a powerful, self-sustaining warrior, we are instead thrown to the other side of the spectrum and start out as a fragile, defenseless soul who has the odds pitted against him or her.

And then we’re told to use our wits and skills to survive.

The post-apocalypse is a natural setting for this but not a necessary one.  All you need is an environment that is naturally hostile, some form of aggressive enemy (either player or computer-controlled), and enough things that can be made into other things that can help one survive if used properly.

Maybe we really love a rags-to-sewn-together-rags story.  Maybe the popularity of these games is connected with our love affair of the zombie genre and how we constantly test our imagination with how we ourselves would survive and thrive in a harsh world.  Me?  I’d probably die quick and leave a weird-looking corpse, but in a computer game, why, I might have the satisfaction of building a teepee, skinning a deer, and then die to a rampaging bear.

It certainly explains why television audiences loved Survivorman and Man vs. Wild.  We live in comfy worlds where we don’t necessarily have to think about survival the way our ancestors once did, and we lament the loss of those skills and talents.  Plus, we kind of worry how quickly we’d die if we did get stranded in the woods some day.  While survivor games don’t really teach us practical tips, they do a good job simulating the techniques to carving out a living.  The feel of it.  Kind of like how Guitar Hero simulated the feeling of being a rock star while doing nothing to teach fans how to play a real instrument.

WURM Online should get a lot more credit than it does for having the foresight to jump on this bandwagon, even if it was ugly as sin and not the most user friendly.  But we’ve seen single-player and limited multiplayer survivor games have much more success with better graphics and a refinement of these ideas, notably DayZ, Rust, and Don’t Starve.

That’s why I think that H1Z1 is on to something.  Zombies and psychopathic players aside, it’s a sandbox where a personal survival narrative can be told, over and over, each time with different results.  We’re sick of being coddled in fantasy worlds; we want to be thrown into the deep water and told to suck it up and swim (or at least to craft flippers and a snorkel on the fly).  If it can nail the feel and fuel the survivor fantasy without being too difficult or too easy, then it’ll grab hold to a segment that has a lot of potential and audience left to tap.

P.S. — I’m on Team Survivorman, if I had to choose.  At least he did all of his own camera work and actual surviving without off-screen hotel stays.

In a move that surprised very few people who have been paying attention to the teasers and hints, SOE is creating a zombie sandbox MMO called H1Z1.  Lots of crafting, building, fighting against zombies — where have we heard that before?