Despite my best efforts to keeping my MMO gaming roster small, it’s swelled from four to five titles this past week as Star Trek Online’s first expansion rolled out.  I’ve long since parked my Federation character in storage, pending any new featured episode series, and thus had no reason to play the game until now.

With Legacy of Romulus, Cryptic hasn’t just added onto the core game, but completed the game in a way that it’s needed ever since launch.  There are three major additions: A full Klingon PvE experience, the addition of the Romulan race and ships, and a UI overhaul.  All three contribute to a finished product and make STO feel “whole.”  I know a lot of folks are sore that Romulans aren’t a full-fledged faction (instead of being a third faction, they’re a neutral one that can eventually join Klingons or Federation), but I’m okay with it.  I think Cryptic is working within its time budget here, and finishing the Klingon content was far more important.  I can only imagine the outcry if Romulans had a full PvE leveling experience and Klingons were still left broken.

So I rolled up a new Romulan and took the maiden voyage of the Manatee.  Romulans — AKA “dark space elves” — have never really fascinated me in Trek.  It’s not just my hatred of elves, but the fact that their culture felt dull and their shoulderpads were far too paddy.  Plus, they were pretty dull in Nemesis and the 2009 Star Trek.

I can’t believe that rolling a Reman — AKA “super-ugly dark space elves” — is considered a premium slice of content.  You either have to grind faction or pay for a special pack, and I just do not see the draw.  It’s like going to Pizza Hut and having them charge you a lot extra for a personal pan pizza with alfalfa sprouts and anchovies.  Maybe you’d order it just to feel different and superior, but the rest of us are going to be eating tasty stuff.

What do I think of the expansion thus far?  I’m inclined to be quite favorable toward it, actually.  STO has always been a guilty pleasure of an MMO for me.  I know it’s not as full-featured or as Trekky as some would like, but the core gameplay has always kept me entertained.  More of it was welcome, indeed.  I like little touches, such as the new Romulan theme, the way the character select screen now shows your ship and crew, and how the UI has been cleaned up significantly.

Rolling a Romulan is basically starting over, so I’m back with a basic bridge crew that everyone else has, a tier 1 warbird that everyone else has (and looks like what you’d see in the Captain Kirk era), and only a small handful of skills.  Still, I look forward to logging in and going down this path again.  I never liked the goody-goody Federation attitude, so a change of pace is welcome.  The story puts you in the shoes of a colonist who flees his/her world when it comes under attack by a sinister Romulan faction.  Over the course of a few missions, you’re tasked with scouting for a new Romulan homeworld while building up your crew.

I chose a Tactical officer this time around, and I’m more than eager to ditch the basic warbird for something better.  I guess the big draw for Romulan/Klingon ships is the ability to cloak, although it doesn’t seem that thrilling to me — you have to stop firing just to reposition and get a brief buff to weapons when you de-cloak.  No thanks, I’d rather keep firing if it’s all the same.

We’ll see how it goes.  I’ll be joining the KDF side when I get the choice, mostly because I don’t want to do the same Federation missions all over again.  Also, forget those guys.  Their shoulder pads are puny and limp, while ours are large enough to launch small aircraft from. 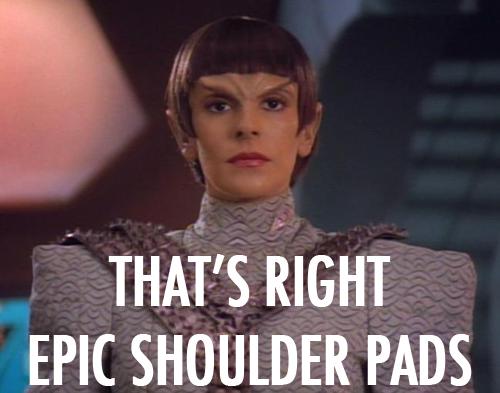