Such a warm, rapturous feeling from this track.  I would definitely splice this into any forest or meadow area in my fantasy MMOs. 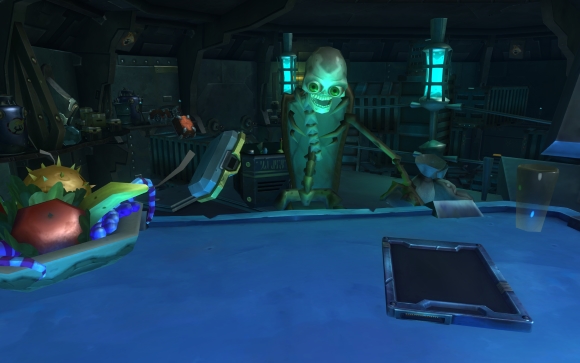 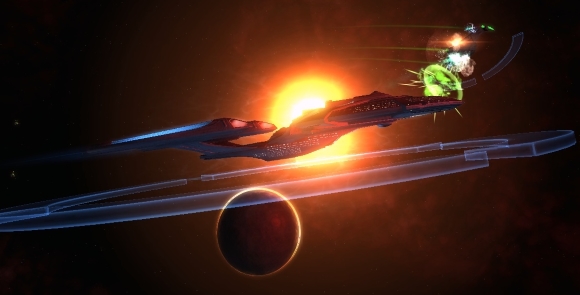 Leveling in Star Trek Online is so absurdly fast these days with the double XP toggled on that I’m almost to the max level while only being about halfway through all of the episodes.  I was grateful for this since it got me out of the Defiant ship relatively quickly, although I was surprised to see that I did get a new free ship at Rear Admiral (level 40).  For some reason I thought they stopped giving you new ships around this point.

Not one to look a free ship in the deflector dish, I grabbed the upgrade to the Sovereign (Enterprise-E).  It’s nothing special, but at least is has a few more module slots.  I’m relying on drops and mission rewards for my gear, so it’s very haphazard, especially in the weapon department.  I’d love a few more phaser turrets, although I did not mind that blue-quality plasma mine that dropped the other day.

So the big internal debate I’m having in STO is whether or not to buy a nicer tier 5 ship now and then upgrade it for the expansion or to hold off and get a tier 6.  It probably makes better financial and statistical sense to go for the tier 6, but that knowledge wages war against a few factors such as (1) the expansion is still several weeks away, (2) I haven’t seen an expansion ship yet that I desperately want, and (3) there are really cool ships and special features that would be pretty great to have now.  I know that I’m not going to buy two separate ships; I just want my “endgame” ship to work on and build up. 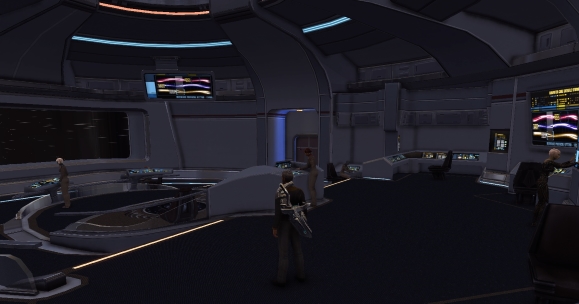 Right now I’m in the thick of the Romulan/Borg episodes.  I can’t believe it took this long into the game before a mission sent me into the interior of my own ship — I would not have thought to do so otherwise.  Oh hey, I have a bridge!  It’s kind of neat to see my crew doing things other than running after me with weapons splayed.

I did the Vault mission the other night with my shuttlecraft.  The mission was all elbowing me and saying, “Y’know, this would be SO much easier with a Delta Flyer, which is purchasable from the C-Store for a low, low price!” and I was rolling my eyes back and saying, “How many times do you need a small craft in this game?  And this mission isn’t that hard with the free craft anyway.  But thanks for trying!”

I’m kind of happy that I have two purple and two blue-quality bridge officers.  With all of the XP rolling in, I’ve been able to max their skills out almost instantly.  We had a conference meeting and decided together that the Wrath of Khan uniforms weren’t really working for our style, so we all went to the tailor and swapped to the experimental Sierra uniforms.  I think they work a lot better for our look.

So that’s been about it in Star Trek Online lately.  I enjoy the time spent playing it but don’t feel pulled or pressured into logging in.  It’ll be nice to know that by the time I finish up with these episodes there will be an expansion’s worth of new ones to explore — although how many those will be is anyone’s guess.

For my fellow MMO soundtrack collectors, just a heads up that the Destiny soundtrack is now available to purchase separate from the collector’s edition.  Currently it’s $9 on Amazon MP3.  It has 44 tracks and I’m looking forward to listening through it!

As always, if you see an MMO score available to buy or for free, let me know!

You can’t see me, but I’m standing and saluting this track.  It’s WildStar done 80s style, full-blown synth and everything.  LOVE IT. 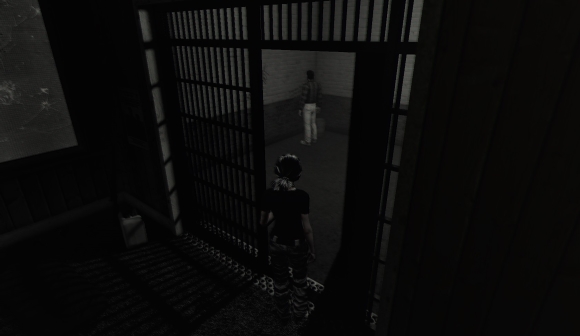 A Light in the Sky (side mission) 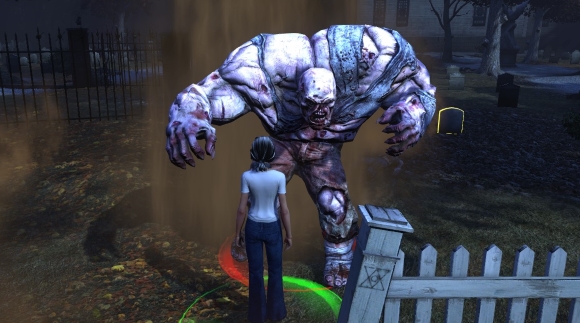 The Hunger (side mission)

Book of the Bokor (side mission)

Message in a Bottle (side mission) 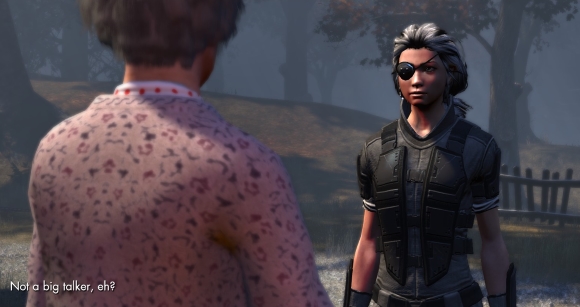 That’s right: My housing plot now has a giant Lopp party.  It’s very likely the apex of MMO acquisitions for me, as I love it so very, very much.  I mean, how can you not?  I have over a dozen Lopp getting funky at my pad, 24/7 — and this party even has a challenge that’s pretty easy to do for good rewards.  I love Lopp.

I actually took the opportunity after finishing up Whitevale to spruce up my housing plot.  I added in one of my pocket dungeons (which is more platformy than fighty, so I haven’t finished it yet), the aforementioned Lopp party, a few new decor, and a Whitevale biome.  I need to get some more renown so that I can change the sky to snow so that it’ll match the biome, but I’m just happy to have some snow around the place.

Farside is completely new territory to me, and as one of the orbiting moons of Nexus, I’m not quite sure what to expect.  So far I don’t think I’ve even arrived at the proper map — I started out in some underground complex, then was sent to Bio-Dome 3, where Pauly Shore and Stephen Baldwin have been tormenting me.  Just kidding, it’s mostly been a thick jungle environment with heavy mob density.

I did make a new cat friend after feeding him 10 giant birds (and he’s still that skinny?).  Having him trail after me once again makes me think how WildStar really should have non-combat pets.  At least as a scientist I can pretend that my scanbot is there for companionship.

Even with the annoying slog through an overpopulated region, I’m pretty pleased that my build is holding up.  I actually feel that I’m killing a little faster as of late, and I’m getting used to my rotation so that I can stagger stuns and blinds while building up volitility for my shotgun attacks.

So yesterday Carbine came out with a new state of the game that, among other things, said that the studio is committing to a quarterly release schedule now — unless, of course, it can’t.  My response is that maybe they should only be charging a subscription on a quarterly basis then.  I don’t fault their decision to place a premium on testing and quality before pushing out content releases, but the monthly update pace was one of the major support beams for the monthly subscription.  Increasingly, WildStar’s business model is becoming an albatross dragging it down.  Hopefully Carbine is having serious talks about cutting that bird loose and either going F2P or B2P, especially with Warlords of Draenor bearing down.  In the context of this year’s releases, WildStar is the underdog, and yet it can’t even take advantage of that status if it’s clinging to the same subscription model as its competition.

The next update is early November, and I’m looking forward to that for the housing changes if nothing else.  Lots of bug fixes will also be appreciated. 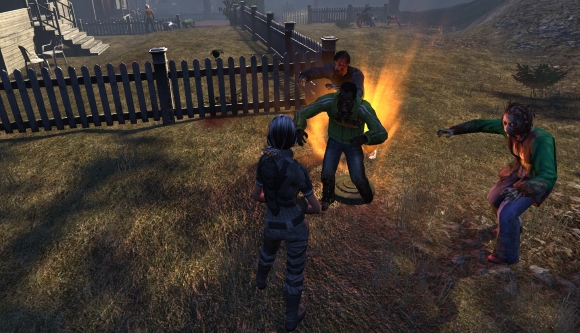 The Coming Dawn (side mission)

Zen and the Art of Motorcycle Maintenance

That’ll Leave a Mark (side mission)

The Occultist’s Cookbook (side mission)

It’s not been the best week for gaming here at Casa de Syp.  One night I had to go to bed far earlier than normal to catch up on some much-needed sleep.  And last night as it looked as though I’d get even more time than normal to play, my computer started locking up hard every time I’d load a game.

I was getting these checkerboard-like graphic glitches that would freeze the game and — if I didn’t alt-tab out and shut the game down quick — force a reboot.  It was happening across several games (I tested WildStar, RIFT, and TSW).  After about a half-minute in the game, freeze.

That was incredibly disturbing.  I updated my graphics drivers and ran some diagnostics, but while everything looked OK, the game crashes kept happening.  Since it only happened in-game, I deduced it probably had something to do with the graphics card, although I’m not a tech expert by any means.  That was worrying.  I’ve been aware that my computer and card have been aging (I think the computer is four years old and the graphics card three at this point?), but I was hoping to get a couple more years of use out of them.

This morning I did a little poking around, and on a GeForce forum someone mentioned that by switching Windows’ power settings from balanced to high performance would help.  I made the switch, and lo and behold, no more graphic crashes.

Dunno why this happened or why giving it more power is going to help.  I’ve been playing these games just fine for a long time before this happened, so I’m going to be a little more wary than usual.  Anyone else encounter this type of problem?