When we formed up a start-from-scratch leveling group in Dungeons and Dragons Online, I was probably more enthusiastic about just jumping into it than was prudent. Namely, I didn’t give a lot of consideration and research into my build. I volunteered to be a healer, saw that Druids healed and summoned stuff, and that was that.

But now that we’ve had months of playing together, I’m coming to a deeper understanding of what this class is like. Even while it was a quick decision, I’m very satisfied with it. I get a huge spellbook and lots of handy healing spells at my disposal, and the perk of extra combat pets is a nice one. However, I only recently came to the realization that Druids come with a really crappy set of weapon proficiencies.

Again, it’s not something I would have considered, but in the months of playing and feeling a little annoyed that I’m hanging in the back with a melee weapon, I figured I’d start to do something about it. So the Druid has the same basic set of simple weapon proficiencies as everyone else (club, quarterstaff, darts, etc.) as well as the martial use of scimitars. To me, it’s a weird combo to have a Druid use a curved scimitar, but I suppose it’s a D&D thing. So I’ve been toting around a scimitar and a shield — or more recently, a scimitar and a dorky bowling ball-looking orb. It just doesn’t scream “healer” or “backup support” to me.

As an aside, our group ran a couple of defense missions and during this one, I noted that there was a mob that somehow got impaled all the way at the top of these spikes. We debated how he got up there to begin with and then determined that when the demonic portals opened, spikes flew out of the ground and skewered this poor soul.

Anyway, at the end of our most recent session, we had all reached the point where we were ready to take a level and move up to LEVEL 9. This came with a whole new tier of spells (yay) but more importantly for me, a feat that I used to gain a weapon proficiency that would make me happy with my back row action. 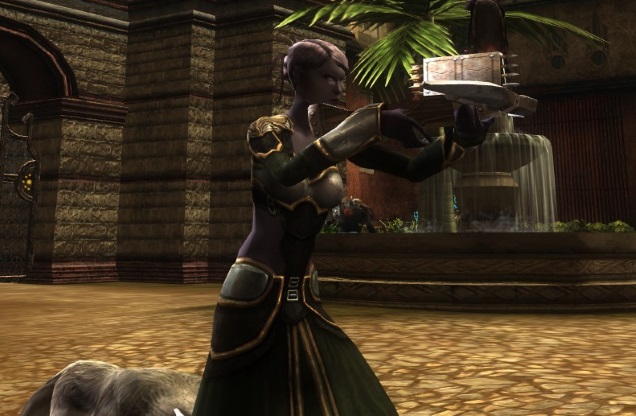 That’s right, baby: My heavy repeating crossbow is back! I can’t tell you how excited this makes me. Thank you, DDO, for giving me the option to build my character to allow a style of play that I enjoy, even if it’s not always the most optimal.