It is time. After taking a full year off playing Star Trek Online in 2019, I felt that it was a perfect time — especially with the 10th anniversary in full swing — to return. And you know me, that means starting alllll over again instead of picking up where I left off. It’s just more satisfying that way, you know?

Plus, this time I can test out the newish ability to play a Tier 6 ship all the way from the start through endgame without swapping out ships numerous times. I have a trio of T6s unlocked on my account, so after some deliberation, I went with the updated Pathfinder (science) ship. It wasn’t a carrier, which is my usual preference, but I always have loved the look and function of science ships, and this one even comes with an aeroshuttle combat pet. So it’s like a mini-carrier in that regard. 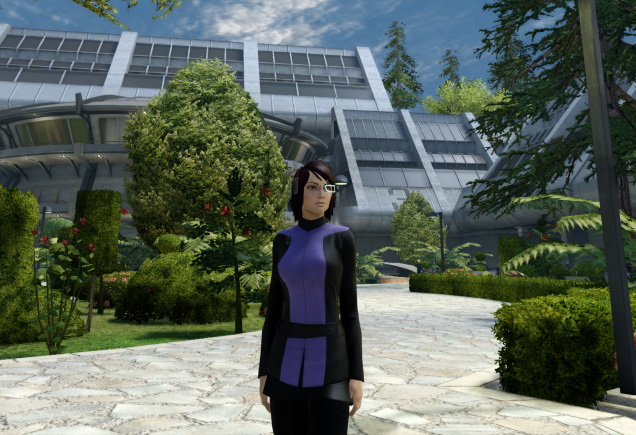 The first night I came back to STO, I don’t think I did a single mission. Instead, I spent a couple of hours working on making a character and designing her outfit. This above look was a work-in-progress — the picture at the top of this post is my final result.

So meet Myfanwy, captain of the Kuchi Kopi (a nod to Bob’s Burgers). I had fun customizing the ship as well, choosing more “chunky” elements and those really neat nacelles that have stabilizer-like fins that move when it goes in and out of warp. 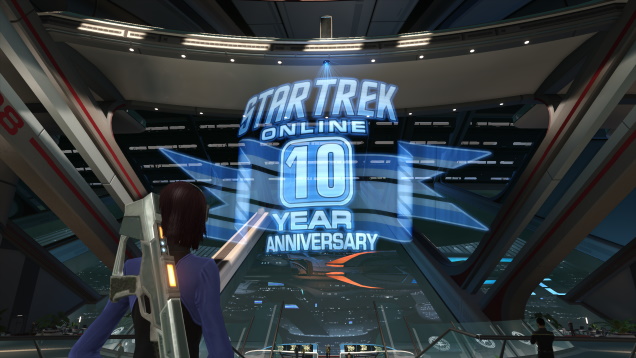 It’s pretty astounding to think that we’re already a full decade into this game. When Star Trek Online launched in 2010, it was a far more ramshackle deal with half-baked systems and lopsided factions. Now we have an MMO that’s fleshed out with expansions, races, eras, hundreds of shops, and a half-dozen factions.

I do think that a giant hologram proclaiming the name of the game and its age is a bit immersion-breaking to put right in the middle of Stardock, but I’ll allow this indulgence. 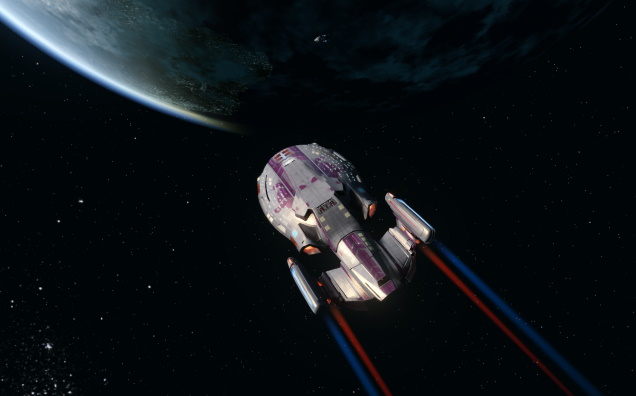 Finally, my voyages were underway. I’m tempted to jump into the 10th anniversary stuff, but it’s not going anywhere and I want to get into the groove with this crew first. Right now, I’m logging in to do about two missions a night and then moving on to a different game. No sense chugging when there’s no urgency for it.

I will say that I have missed the gameplay — the stories, the ship battles, and yes, even the ground combat. I think the ground combat gets a lot of jibing when it’s honestly not that bad. There aren’t many MMOs that let you lead around your own personal army all the time, so as a pet guy, I always feel like I’m fielding a crew of them.

And let’s not forget all of the cameos. Hearing Spock’s voice from time to time gave me a bit of a heart-twinge at Nimoy’s passing, but it’s good to know that he and others have a legacy in this game as well.

A friend said the other day that Star Trek Online’s writing team does an amazing job bringing all of the different shows and plot threads together — and that it often does this far better than the shows do (especially the newer ones). I kind of agree with this. The Discovery/Picard era shows feel so far removed from Star Trek even though they can be enjoyable on their own terms. But I’m having a hard time mentally meshing them with what came before. Maybe the MMO can be the bridge there.

One thought on “Star Trek Online: These are the voyages of the Kuchi Kopi”