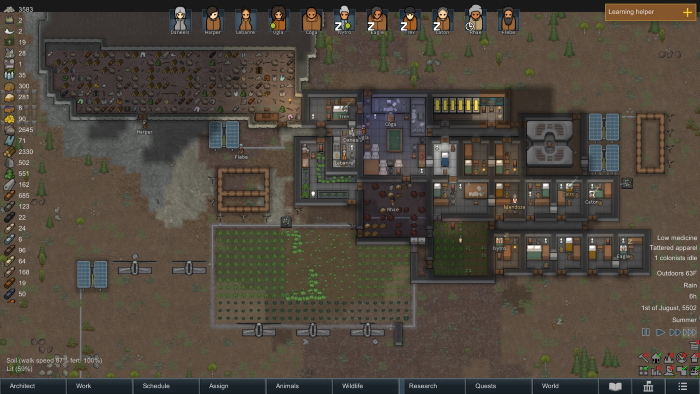 I haven’t been blogging about it, but over the past few weeks, I’ve been playing this ongoing game of Rimworld that’s turned into something pretty interesting. Initially, it was a simple Boreal Forest permadeath scenario that I’d pick up here and there. Unlike some of my previous colonies, this one kept growing and growing.

I’d lose one settler and gain two more as converted prisoners. I hollowed out a massive cavern for storage. I set up two forts with turrets and cannons as defensive measures. I harnessed the power of geothermal energy, planted vast swaths of crops, assembled machine guns for everyone, and so much more.

It’s been a rollercoaster of a colony, with tragedy striking often — just not so hard that it breaks things. I had a cave-in (a first for me) that crushed two colonists to death and taught me the value of mining responsibly. I’ve accrued so much wealth that decent-sized raids are now showing up. I killed a couple of rare thrumbos, cracked open the ancient evil chamber (without losing a single guy), and killed every apex predator on the map who dared show their face.

My biggest challenge with this biome is making sure I have enough food for the winter, especially with 11 colonists (more or less). I do stock up during the growing season, have a hydroponics bay, and an indoor farm, but I still have to supplement that with doing a lot of herd hunting. 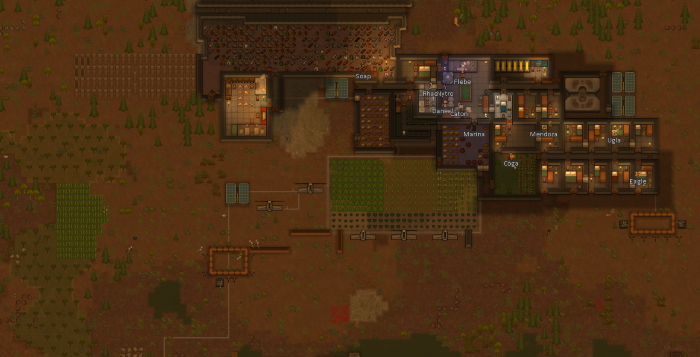 Even with a haphazard approach to keeping everyone alive, generally the colony stayed pretty constant, around 10-12 colonists. Year after year passed, people got married, people died, and what were once huge leaps in progress became tiny incremental improvements.

What I found out through this is that, strangely enough, Rimworld’s appeal might be strongest when you’re losing. When it’s the early game and you’re scrabbling for survival. Once you can overcome that and gain enough protection and self-sufficiency, not even most of the special events will pose much of a threat.